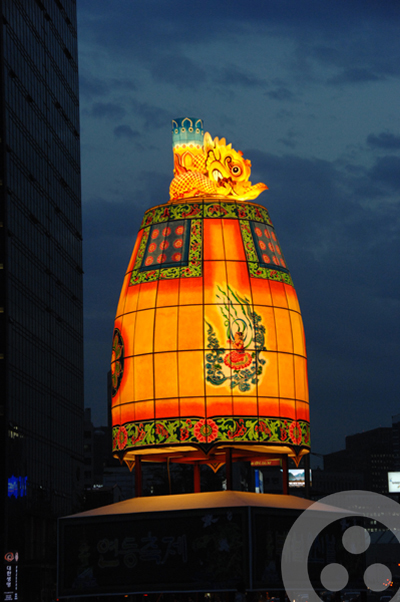 Lantern of Harmony and Mutual Prosperity

On the 21st of April in the public square in front of Seoul City Hall a ceremony was held for the lighting of the ornamental lantern in anticipation of Buddha’s Birthday. Standing 18m in height, the lantern is made from traditional Korean paper and takes the form of the sacred bell of the great King Seongdeok and the temple bell of Sangwonsa.

The Message of Compassion will Shine until the 12th of May

The heartfelt prayers from the heart of the Buddhist community for ‘this land to become one through harmony and mutual prosperity’ lit up the Seoul night sky. The ceremony for the lighting of the symbolic ornamental lantern was held on the 21st of April in the square in front of Seoul City Hall by the Committee for the Celebration of Buddha’s Birthday (chaired by Jogye Order president Ven. Jigwan).

The symbol of this year’s celebration is the bell. The sacred bell of the great King Seongjeong (National Treasure no. 29) and the temple bell of Sangwonsa (National Treasure no. 36) are particularly Korean, and their representation in the form of this year’s paper lantern stands 18m high. Like the shattering of the predawn darkness by the sound of the bell, this lantern, entitled the ‘Lantern of Harmony and Mutual Prosperity,’ embodies the prayers for the resolution of the growing distance in our society and the problems facing humanity, and for the unification of our people and mutual prosperity of all humankind.

This year the crafting of the lantern reached a new level of development with the use of traditional Korean paper instead of the plastic that has been used until now. The durability and water resistance of traditional Korean paper means that the lantern can be displayed even in inclement weather. This lantern lighting ceremony served as the declaration of the formal opening of the celebration of Buddha’s Birthday this May 12th. Accordingly, about 1000 members of the Buddhist community including Jogye Order president Ven. Jigwan and Seoul Mayor Se-hun Oh gathered for the preliminary celebration and honoured guests lined up on the platform to take refuge in the Buddha, the Dharma and the Sangha. Thus, the brightly shining Lantern of Harmony and Mutual Prosperity will light up the city of Seoul until Buddha’s Birthday, revealing the true meaning of the Buddha’s appearance in the world.

Through his invocation, Jogye Order president Ven. Jikwan offered prayers for the peace and prosperity of the nation, “Sakyamuni Buddha, I pray that you will oversee the expedient and peaceful reunification of the North and the South, and the growth in strength and prosperity of our country and peace in body and mind of our people. I pray that all things, living and inanimate, may enjoy peace, and that all those who have come here from other countries live with a sense of community. May you bestow wisdom and merit upon all our people.” Following the closing of the lantern lighting ceremony, everyone lit small lanterns and carrying them, paraded around the square, praying for the realization of Ven. Jikwan’s prayers. 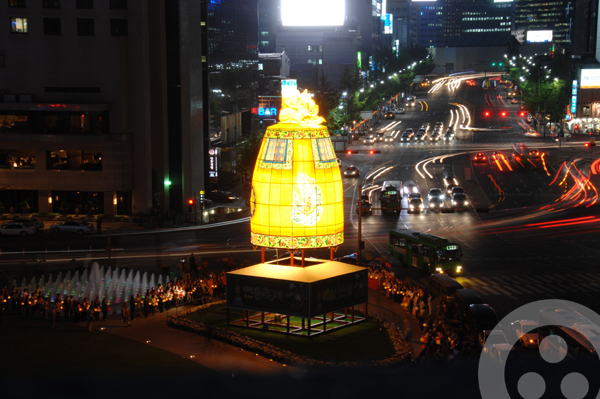 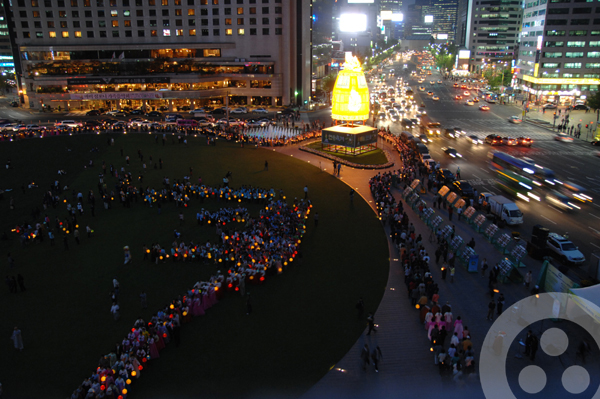 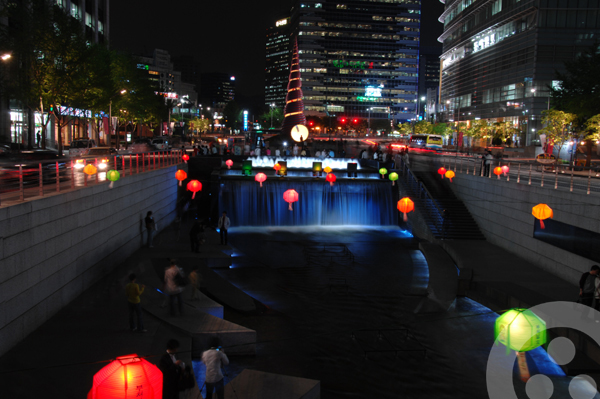