The Buddhist newspaper Bulgyosinmoon and the Social Welfare Foundation of the Jogye Order, on April 4th, at Shingyesa Temple, Geumgangsan Mountain, Sending Wheelchairs to the disabled in North Korea, for the first time in the Korean Buddhist World 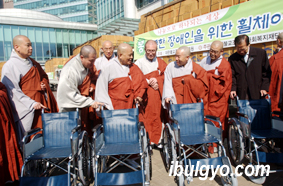 The Buddhist newspaper Bulgyosinmoon and the Social Welfare Foundation of the Jogye Order made donations valued at 100 million won, including 360 wheelchairs, on April 4th at Shingyesa Temple, Geumgangsan Mountain, through the Joseon Buddhist League. Many monks and concerned people joined the conveying ceremony. They included Ven. Jiwon, the Director of the Social Affairs Department, Ven. Jiheon, the Executive Director of Jogye Order’s Social Welfare Foundation, personnel from the Buddhist newspaper, and about 20 interested Buddhists from North Korea, including Seo, Gijeong, the Chief Secretary of Joseon Buddhist League.

Before this, there was a previous gathering for donating wheelchairs to North Korea in the Memorial Hall for Buddhist History and Culture on March 30th, with the President of the Jogye Order attending. Eleven tons of wheelchairs were loaded in 2 containers at Incheon harbor and sent to Nampo harbor in North Korea.

There has been support in the line of cultural and national exchanges with North Koreans before, such as financial support, restoring Shingyesa Temple, painting temples in North Korea, and so on. But this support for the physically challenged is the first. The Buddhist newspaper Bulgyosinmoon and the Social Welfare Foundation of the Jogye Order have been collecting funds to send wheelchairs for the disabled in North Korea as a part of campaign called The World becoming One by Sharing, since 2004. From April to December 2004, a total of 60 million won was collected mainly from temples, Buddhist groups, and Buddhist schools. Besides this, a wheelchair manufacturer donated about 100 million won.

Ven. Jihyeon, the Executive Director of Social Welfare Foundation, said, “Due to Bulgyosinmoon, the foundation, and many people who joined the fund raising, we have an opportunity to help the isolated people in North Korea”. He also added, “I hope we could have more chances to have a talk with North Korea in accordance with donating wheelchairs.”