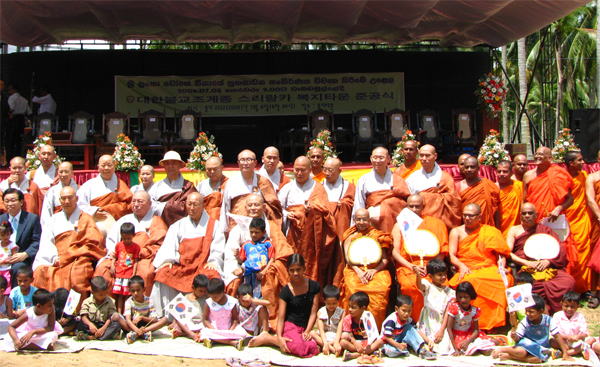 On July 8, the Completion Ceremony of the Sri Lankan Jogye Order Welfare Town was held in Gampaha Pasala.  After the ceremony, Ven. Jikwan with the Korean delegation and the Head of the Askriya Order Ven. Mahanayaka with the Welfare Town children pose for a commemorative photo.>

The Completion Ceremony of the Sri Lankan Welfare Town

Four years ago, Korea Buddhism made a pledge to plant the seed of compassion in a faraway land of our brethren.  On July 8 the Head of the Jogye Order, Ven. Jikwan presided over the Completion Ceremony for the Sri Lankan Jogye Order Welfare Town at Gampaha Pasala, .

In January 2005, the Jogye Order of Korean Buddhism and Korean Buddhists pledged to construct a welfare facility for the numerous victims of the Tsunami.  Now it is completed.  This is the first foreign welfare facility built by the Jogye Order.  It is a symbol of Jogye Order’s great commitment to compassionate activities.  The commitment goes beyond just the construction, as Dosunsa Temple in will oversee operations of the Welfare Town .

Despite the 30o Celsius plus weather, over 500 attended the Completion Ceremony.  The ceremony began with representative monks from each country unveiling Buddha statues.  Ven. Jikwan said, “May this be a place where children who have suffered great loss may live, study, and cultivate their dreams.  The completion of the town is merely the beginning.  I request the unstinting support and interest of and so that the children of this facility may grow to be the pillars of society and contribute greatly to the peace and happiness of humankind.”

The Head of the Askriya Order, Ven. Mahanayaka said, “Our relationship has deepened through the construction of the Welfare Town .  Let us help each other and make efforts in the progress of our nations and religions.”

Ven. Milwoon, the Vice-chair of the Council of Elders said, “When Korea and first made friendly ties, Ven. Chundam and Ven. Jawoon visited as special envoys.  Today Ven. Jawoon’s Dharma heir, Ven. Jikwan presides over the ceremony and Ven. Chundam’s Dharma heir, Ven. Sunmook is overseeing the operations of the town.  This cannot be by chance.  The completion of the Welfare Town will be a key point in the friendship of the two countries.”

The Welfare Town is built in Pasala of the Gampaha district on 20.5 acres (25,000 pyung).  There are five buildings for the orphanage and one building for the preschool.  The orphanage can accommodate 60 children, and 24 children have been staying since the beginning of this month.  The preschool has 40 children currently enrolled.  It is considered the best in the area, receiving high praise from the local people.

Members of Jogye Order Council of Elders Ven. Myungsun, Ven. Hyeseung, Abbot of Jogyesa Temple Ven. Semin, Abbot of Dosunsa Temple Ven. Sunmook, Central Council Member Ven. Jonghoon, the administration’s Director of Social Affairs Ven. Seyoung, overall Director of Social Affairs Ven. Jiwon, the head of the Board of Directors for the Jogye Order Welfare Foundation Ven. Daewo, Korean Ambassador to Sri Lanka Choi Gichool, among more than 120 were in attendance for the Korea side.  Along with the Head of the Askriya Order Ven. Mahanayaka, the second Head Ven. Anunayaka, and Manghala Askriya University ’s Vice President, among more than 400 were in attendance for the Sri Lankan Side.

In addition, Ven. Jikwan made a courtesy visit to the Sri Lankan President, Mahinda Rajapaksa.  Beyond just a religious venture, the trip proved to be a successful diplomatic endeavour in strengthening the friendship of and . 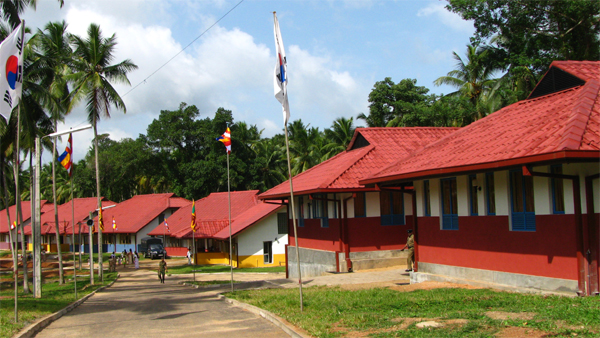