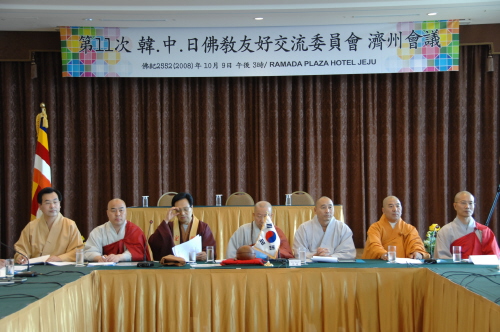 This year’s theme was, “The Role and Responsibility of Buddhists in Environmental Preservation.”  The conference began with the Cultural Exchange Committees from each country meeting together.  They came to a decision to hold the 12th conference in Japan, next year.

After dinner, which was sponsored by the Governor of Jeju Province Kim Taehwan, the conference participants attended the 8th Korean Buddhist Art Festival at Yakchunsa Temple at Seogwipo City , in southern Jeju Province .

“May we, unwaveringly accomplish world peace and harmony,” was the theme of the Collective Prayer written for this occasion.

The second day began in the morning at Kwanumsa Temple with a “Dharma Meeting for World Peace” for the safety and peace of humankind and the preservation of the global environment.

Leaders from each country, leaders from the Buddhist orders, Abbot of Kwanumsa Temple Ven. Wonjong, Abbot of Bumeosa Temple Ven. Jungyeo, Deputy Secretary of the Ministry of Culture, Sports, and Tourism Shin Jaemin, Jeju Province Deputy Governor of Environment Yu Duksang, were among over 3000 who attended the Dharma meeting.

The meeting began with Kwanumsa Temple ’s choir singing, “Today is a happy day.”  Then a consecrating ceremony was held for a 12-meter tall Buddha statue with consecration prayers said by each country’s representing monk.  Then, Kwanumsa Temple ’s abbot Ven. Wonjong read the welcoming remarks, followed by peace prayers, a congratulatory message from President Lee Myung-bak, congratulatory remarks, recitation of the collective prayer, and the handing over of a donation for Jeju environmental preservation. 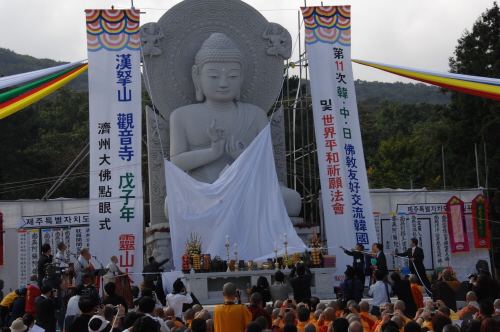 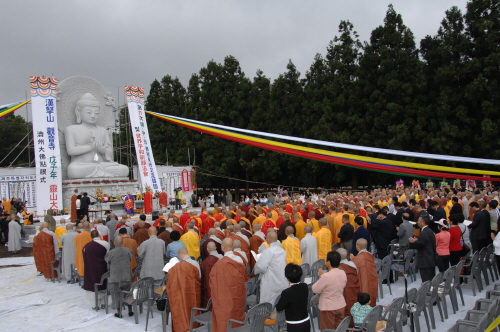 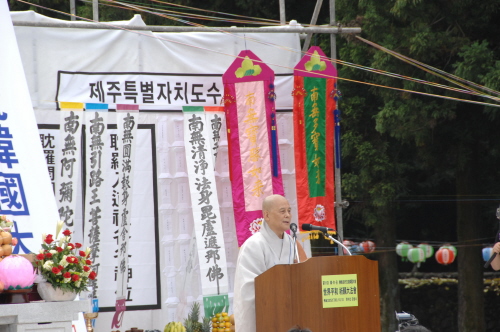 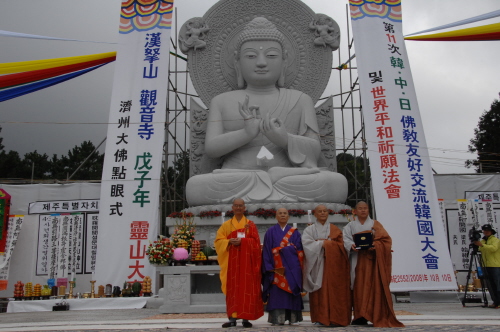 Ven Jikwan representing Korea said, “A Bodhisattva looks upon all the beings of the ten directions, including the smallest insects, with love, and with the eyes of a newborn child frees oneself from suffering.  With great respect for nature and beings, the environmental issue must be addressed from the heart of compassion.”

The collective prayer read, “Global warming has resulted from not following the Buddhadharma and seeking one’s own comforts.  Despite this, we fail to stop our destructive actions.  May our three countries’ Buddhists unwaveringly accomplish world peace and harmony, and may we create a pure land where humans, animals, and plants live together in harmony.  May religious discrimination disappear, and may religious discord vanish, and may all religions stand together to make a peaceful world.”

Then, a lunch was sponsored by Yu Inchon the Secretary General for the Ministry of Culture, Sports, and Tourism.  Following the lunch, an International Academic Symposium with the theme, “The Role and Responsibility of Buddhists in Environmental Preservation” began at 3 p.m. at the Ramada Hotel.

The 11th conference came to a close with a dinner sponsored by Ven. Jikwan the president of the Association of Korean Buddhist Orders.

This Korea, China, Japan, Buddhist Goodwill Conference has experienced many internal and external changes since its inception in 1995, and every year its role in the world is increasing.