“Every living being is precious.” 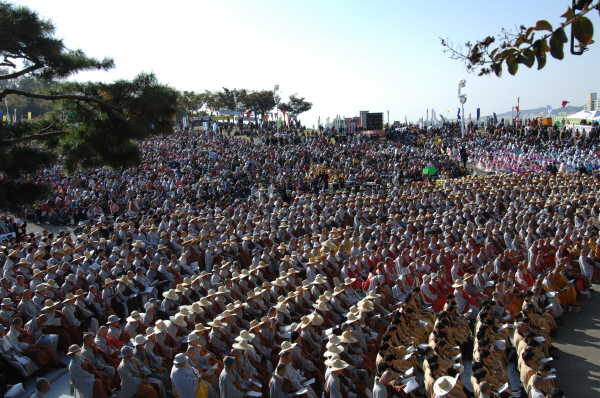 A Buddhist protest rally to pressure the government to legislate laws to forbid religious discrimination was held November 1 at the Duryu Park Outdoor Music Hall with 1500 monastics and 30,000 Buddhists in total attendance.

“Lord Buddha, whose light of wisdom and compassion brightens the entire world.

In the Buddha’s presence, on this day, we vow all together to do whatever we can for national solidarity, to overcome the economic crisis, for a world free of discrimination and conflict, for a world that respects diversity, to create a world where every living being realizes each other’s value.”

In this way, the Daegu Kyungbuk Province Buddhists and citizens prayed at Duryu Park for religious harmony, national solidarity, and resolutions for social conflicts.

Jogye Order’s head, Ven. Jikwan’s speech was read by Ven. Wonhak:  “At this great Dharma meeting, we have raised the banner of justice to begin a long journey.  Those participating in this process of justice must be ready to forgive hundreds and thousands of times.  Until the ending of injustice and wrongfulness, to perfectly preserve the tradition handed down by our forefathers, and until justice prevails, we must maintain determination.” 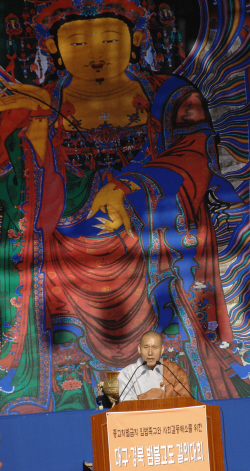 The event coordinator, Ven. Sungwoong said, “We are visitors on this small planet called earth.  Before leaving this earth, let us sew the seeds of understanding and tolerance, kindness and compassion.  Today’s meeting is a place to recommit to Bodhisattva activities.  I hope that we will apply ourselves to sew the seeds of religious harmony.” 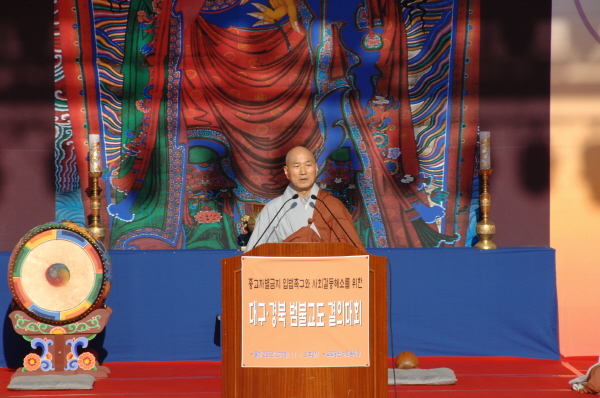 Proposal for Buddhists to take Concrete Actions for Religious Harmony

l        To pray 10 minutes every morning for religious harmony and national solidarity.

l        To be a watchdog for religiously biased actions that provoke religious conflicts, and to take counter measures.

l        Each person to take on one volunteer service activity.

l        Temples and groups to have meetings and activities to discuss state of affairs.

l        To become a true Buddhist and practitioner.

Well received by the participants was the presentation by the Daegu area children of “a letter to our grandfather President.”  The children requested the President to create a nice world where we can live together in harmony.

The 30,000 participants resolve to do the following:

l        To pressure the government to take constructive steps toward legislation to prevent religious discrimination by government officials.

l        To pressure the National Assembly to take immediate measures during this legislative session to revise the regulations for religious bias.

l        To make very clear that we will protest widely government officials who practice religious bias through religious exclusivity.

l        To make clear that we will do our utmost to resolve every kind of discrimination and conflict, and to fulfill the original mission and role of religion. 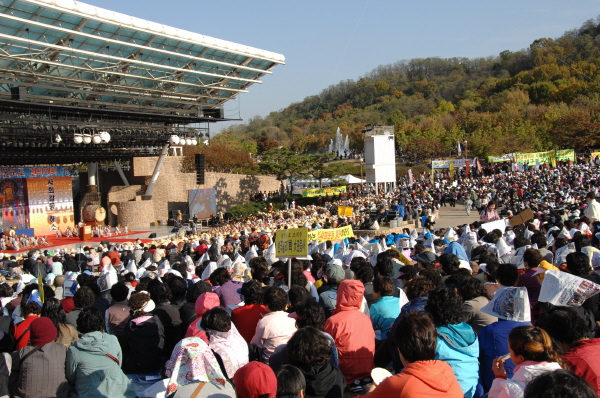