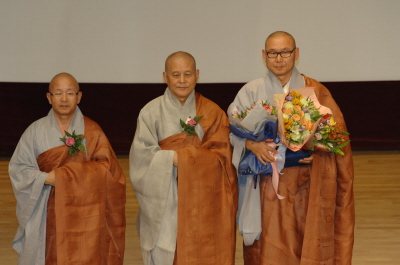 The Jogye Order awarded Dharma Propagation Awards on Dec. 2 at the Korean Buddhist History and CultureCenter.  The following are the recipients:

Yang Seong-hong, Honorary Chair of the Division of Dharma Propagation

The above names were among 11 in total who received the Dharma Propagation Award and prize money.  Unfortunately, the Grand Prize award winner, Ven. Nung-ga could not attend due to health issues.  His disciple Ven. Jonghoon receive the prize for him.

Jogye Order’s administrative head, Ven. Jikwan and the head of the Department of Dharma Propagation, Ven. Hechong, gave out the awards.

Ven. Jikwan said, “Dharma propagation is leading those who are unfamiliar to Dharma to the way of Lord Buddha, and within the way, to lead together a happy life toward enlightenment.  We should follow the example of today’s award winners to propagate widely throughout the world, the teachings of Lord Buddha.”

Ven. Hechong said, “The awards winners have gathered great merit through the efforts in the respective fields.  Today’s awards recognize and encourage such Bodhisattva activities.”

The nominations for the award candidates were receive from Oct. 21 to 31.  The award selection committee announced the winners on Nov. 18.  The awards were established in 1987 to reward those making efforts in spreading the Dharma.

This year grand-prize winner, Ven. Nung-ga met the Dharma accidentally while leading a group of high-school students on a field trip to BeomeomsaTemple.  He was impressed after reading the Lotus Sutra.  He became a monk at BeomeomsaTemple in 1950.  He is known for widely distributing Buddhist texts for free.  He carries the conviction that the words of Lord Buddha must easily reach Buddhists to transform their lives.  He has been publishing 60,000 “Buddhist Scriptures” (concise bilingual Buddhist text) for free distribution. 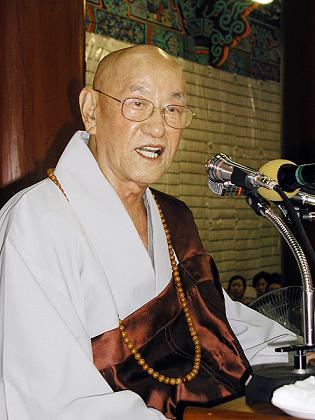 This year, Ven. Nung-ga printed 20,000 Seon manuals called “Ganhwaseon” for distribution to Seon temples to encourage determined practice.  During the summer retreat season, he also distributed sets of “Sunrim-gokyung-chongso” to more than 100 Seon temples.  The selection committee said, “We selected Ven. Nung-ga because of his contribution to Dharma propagation through the distribution of the “Buddhist Scriptures.”

Ven. Nung-ga also established the Three Jewel Buddhist Foundation over 30 years ago to aid the poor and disadvantaged.