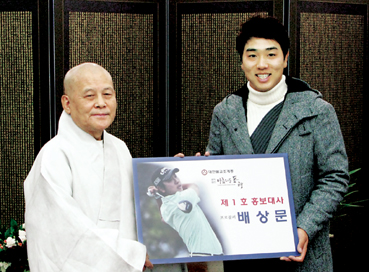 Ven. Jikwan said, “Relying on the Buddha, please make efforts to widely promulgate Korea and Buddhism to the world.”

Bae Sang-mun said, “It’s a nice feeling to be selected as a spokesperson, with which I can do good things.”  He continued, “I will do the best I can.”