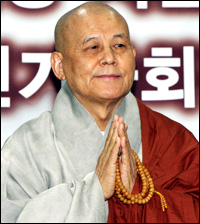 Ven. Ji Kwan, the executive director of the Jogye Order of Korean Buddhism, shared his New Year’s greetings Tuesday at the Jogye Temple, stressing that this year needed more mutual support and a simpler lifestyle and state of mind.

``Yes, this year will be difficult, not only in Korea, but also globally. People are worried but we must not avoid the reality. We must overcome things, and we must do this spiritually. The most important way is to control our minds. We must be modest and stop searching for luxury and wealth. If we have a clear mind, we can overcome anything,’’ Ven. Ji Kwan stressed.

When asked if he was satisfied with his past three years as the director, Ven. Ji Kwan laughed and said he still had a long way to go.

The 76-year-old head is expected to step down as the head of the Jogye Order this year.

``Personally, some plans were successfully completed, while some still need more work. In the case of the children’s enlightenment programs, I think we still need to work more, but the fact that we started with children was an important step. We have also worked on various temple stay programs for the past three years, and I am glad that many people, including foreigners, know about them better compared to the past,’’ he said.

The Jogye Order is also planning to open its new Temple Stay Center in February, and Ven. Ji Kwan said that he will work to transform the neighborhood surrounding Jogye Temple in Insa-dong as a center for traditional Korean culture and also seek to register the Buddhist rituals and festivals as an Intangible Culture Asset for the nation. Ven. Ji Kwan will continue to work on publishing Buddhist books and meditating after finishing his term as director. The voting for the next head of one of Korea’s biggest Buddhism Orders will take place in October.