Walking in the footsteps of Wonhyo 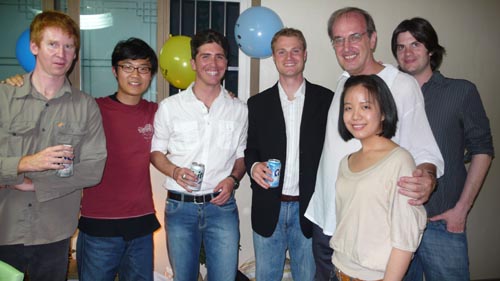 Chris McCarthy (third from left), Tony McGregor (second from right) and members and supporters of the Wonhyo pilgrimage. By Moon Gwang-lip

In a trek billed as a “21st-century version of ‘The Canterbury Tales,’” an intrepid group of expats are planning a pilgrimage in the footsteps of Buddhist thinker Wonhyo (617-686).

Participants will journey along the routes that Wonhyo traveled before attaining enlightenment. The first pilgrimage project launched in Korea, it is sponsored by the Korea Tourism Organization and the Ministry of Culture, Sports and Tourism.

“There are countries attracting many tourists into pilgrimage trails and we think this Wonhyo project will give Korea a good pilgrimage trail that helps Korea become better known to the world,” said Dho Young-shim, a key sponsor of the project.

Dho, a special adviser to the secretary general of the United Nations World Tourism Organization, said the three-year period set for the project includes designing the exact route, developing details of the tourism product and setting up its Web site.

Around 25 people from eight countries gathered to celebrate the inauguration of the project in
Gyeongju, South Gyeongsang Province. The pilgrimage will start in Gyeongju and end in Pyeongtaek, Gyeonggi Province.

What made Wonhyo appealing to the project participants, compared to other historical figures in Korea, is not just his enlightenment, but how he reached that state.

Wonhyo, wanting to go to China to study Buddhism, walked from Gyeongju, then the capital of Silla, to a spot near the western coast of the Korean Peninsula.

In a dark cave one night, a thirsty Wonhyo found water and drank it. The next day, he discovered that the delicious, thirst-quenching liquid was dirty rainwater swarming with maggots that had collected in a rotting skull.

As he fell to his knees and vomited, he experienced deep inner enlightenment. He realized that truth is created by the mind.

“He didn’t go to China, but he found enlightenment. I think that is the universal element that everybody can relate to,” said Chris McCarthy, an American taking part in the project.

“Everybody has the same question about life, and Wonhyo apparently found it.”

According to Tony MacGregor, a Canadian expat who first suggested the idea, the project will include elements of “The Canterbury Tales,” a collection of stories told by Christian pilgrims to amuse each other during their journey. The stories were written by Geoffrey Chaucer in the 14th century.

“We plan to write about our experiences and entertain each other with stories and produce a kind of 21st-century version of The Canterbury Tales,” said MacGregor. “Chaucer’s tales open a window on life in 14th-century Europe, revealing the values, the humor, the conflicts, the beliefs, dress and way of life in England at the birth of European civilization.

“We hope ‘In Wonhyo’s Footsteps,’ will be equally entertaining and also offer future readers a glimpse of life today,” he said.