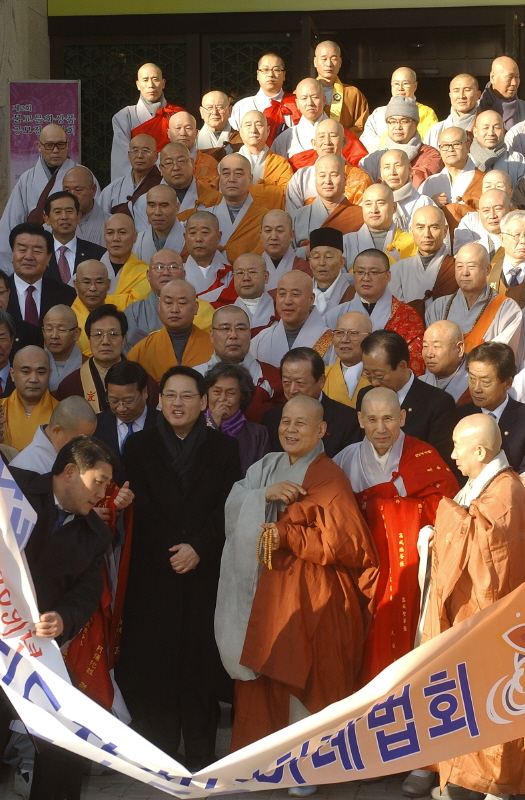 “May the wind of peace blow into our land to make it a Buddha Pure Realm, may our country and people become one, may our economy swiftly recover to become a developed nation, and may this nation and people be ever blessed.”

In the New Year’s Dharma address Ven. Jikwan said, “Let us not leave alone the ox of the three poisons of hatred, desire, and ignorance.  Rather, we must bridle it in to work diligently.”  He continued, “In this year, let us faithfully work hard to be as earnest as an ox.”  He continued, “Whatever difficulties arise, let us overcome them with wisdom and responsibility based on compassion.”

Taego Order’s Head Ven. Woonsan’s address was read by the Second Head Ven. Bokyung, “In this new year, the citizens and government must become one heart and one mind to overcome the past conflicts and gather in strength and wisdom.”  He continued, “’From every walk of life and every class, we must come together to restore the economy and security.  We should work together to make a happy life for every citizen.”

Yoo Inchon, the Head of the Ministry of Culture, Sports, and Tourism said in the congratulatory remarks, “Our government must respectfully heed the diverse opinions of the Buddhist community and every field and class. Without being bound by formality and protocol, we will do our best to bring about development with a pragmatic mind-set for citizens to live well and comfortably.”

In attendance at the Dharma Service were: Head of the Jogye Order Ven. Jikwan, Head of the Chuntae Order Ven. Jungsan, Jingak Order’s Representative Hejung Jungsa, Taego Order’s Second Head Ven. Bokyung, Head of Jogye Order’s Central Council Ven. Bosun, Jogye Order Head of Monastic Education Ven. Chunghwa, Head of Jogye Order’s Department of Propagation Ven. Hechong, and other leaders from the 26 Buddhist Orders that make up the association.  These leaders met together to strengthen friendships and pray for the development of Buddhism and the Korean nation.  Also in attendance were: Head of Jogye Order’s Central Council of the Laity Kim Uijung, National Assembly Member Choi Byung-guk and An Hong-jun, the President of the Blue House Buddhist Association Gang Yoon-gu.  In total, over 300 attended.