The New Year has dawned but many worries lie ahead.  The financial crisis worsens day by day.  The severe division between the main political parties and social divisions (for example over the Great Canal Project) are pervasive.  Considering the current world conditions,  the Buddhist community’s outlook for the forthcoming year is formidable.

Jogye Order’s Head Ven. Jiwan said, “The past year was very difficult due to the social conflicts and economic adversities.  This year also, we expect many difficulties.”  He continued, “Abandoning the ways of a painful past, beginning anew through repentance is considered a most important Buddhist teaching.”

The followers of Buddha must stand together and cooperate as the difficulties increase.  We must stay firm in the face of confusion.  This year’s priority is the development of social welfare projects and Dharma propagation.  This fulfills the meaning of the Buddhist credo of saving beings (하화중생 下化衆生).

The Jogye Order plans a nationwide campaign to help lower income and unemployed families.  The “Sharing one meal” project will help the hungry.  During Buddha’s birthday celebration, a portion of the lotus lantern offerings will be used to help the impoverished with the project “Raising the lantern of hope.”

“Compassionate alms” is a project developed from surveying the headquarter temples.  This program will take effect throughout the nation in March.  “108 prostrations for our neighbors in need” is another new project.  Also new this year is an idea to help relieve the extreme unemployment among the younger generation by using the “ Temple Stay ” program.

This means that the “ Temple Stay ” program will select among the unemployed to be translators and guides for foreigners.  We plan to continue supporting foreign migrant workers and their families by constructing cultural centers and having “ Temple Stay ” programs for them to experience Korean culture and learn meditation.

To make the education and management of the laity more efficient and concrete, there is a plan to renovate the laity education system and laity registration.  The Kan-hwa-seon Entrance program, Practice Motivation program, and Popularizing Seon Practice program will continue as before.   There is a plan to increase the activities of the “21 Buddhist Ecological Agendas” to help preserve the natural environment and prevent infringements on temple environments.

The eradication of religious bias will continue to be a focal point for the Jogye Order.  Using the results and evaluations from the August 27, 2008 Buddhist Political Rally as the foundation, watch and prevent programs will continue as well as other programs for religious peace and solidarity.

The Committee for Religious Peace will return under the Department of Social Affairs from the Central Council of Laity.  This means that the Jogye Order leaders will personally take on the “religious bias” activities.  For “religious bias,” there will be new programs developed, lecturers trained, and diverse research programs installed.  We expect a positive change in “religious bias” in every field of society.

In 1980 (the October 27 Incident), the new government regime searched throughout the 5731 temples and hermitages to forcefully take away 153 monks and nuns for questioning.  This is a prime example of the abuse of government power.  As a result, Buddhism was defamed and countless monks and nuns suffered physical and mental harm.

The Jogye Order will endeavor to amend this shameful history by adopting the “October 27 Incident Special Regulations” and the formation of the Victim’s Dignity Restoration Committee.  The emphasis will be on compensating the medical bills for victims, holding memorial events and constructing a commemorative museum.  Along with this, we will make strenuous efforts in reforming any laws, which stifle basic Buddhist practice and propagation activities. 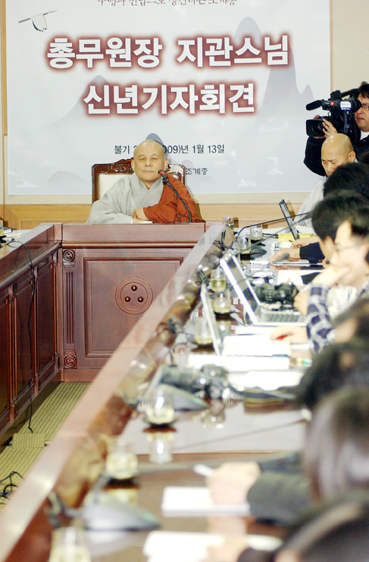 We look forward to the completion of the preparation for the "Daedeok" and "Jongdeok" monastic hierarchal levels to be enforced in 2010.  The qualifications for all the positions within the Jogye Order will be reorganized to be based on the monastic age and actual age as well as the hierarchal monastic system.  In other words, those who practice diligently will be rewarded.  “Pure Rules of a Zen Temple ” for the practice lineage of Korean Buddhism and “The Life of Buddha” for a correct understanding of the founder of our religion are works to be compiled.

In addition, among the records of great Korean masters, 69 have been selected for the Korean and English publication of the “Annals of Korean Tradition.” For the globalization of Korean Buddhism and culture, there are plans to build international Seon centers.  There are also plans to integrate Temple Stay programs under one organization.  Additionally, to introduce the Korean practice tradition to foreigners, there is a plan to produce in English a manual about Kwan-hwa-seon (Korean Seon practice).  There are also plans to improve the order’s finances among other multiple plans for the New Year.

Ven. Jikwan said, “Korean Buddhism is a meaningful establishment, which upholds the Tripitaka Tradition of ethics, meditation, and wisdom.  The Jogye Order advocates practice in these dark and difficult times.  There is great responsibility upon the shoulders of Jogye Order members to fulfill this year’s plans.”  The graceful manifestation of the inner possessions of ethics, meditation, and wisdom--is Jogye Order’s blueprint for this New Year.