Most Ven. Bupjeon’s Speech to End the 2008~9 Winter Retreat 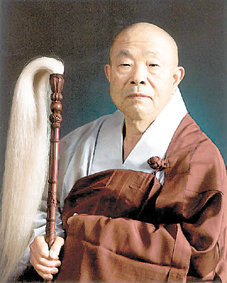 “The storehouse of treasure is in your own home; don’t look to borrow it from others.”

The following is a dialogue between the Chinese Seon master Namjeon and the monk Sajo.

Sajo said, “People do not know the jewel.  It is said that realization occurs within the Buddhanature.  But, what is the nature?”

“The coming and going that I’ve done for you up until now IS the nature.”

“But, there is never a coming or going.”

“That too is the nature.”

“Then, which thing is the jewel?”

At this, the master called Sajo over.  Sajo came close to the master and said, “Yes, master.”

At this, Sajo gained realization.

If a monk has practiced hard for a season and gained the eye of wisdom, what will he have to ask and what will he have to answer?  If we think about it, in the eyes of the wise the questioner and answerer are both as foolish as a boat turned over.  However the fact that the monk Sajo gained realization in the current of the question and answer dialogue, attests to the infinite compassion of the Seon master Namjeon.

Thus, this humble monk will ask you the monks and nuns, who have just completed the winter retreat, “The thing that Sajo realized, was it the jewel or the nature?

If one cannot answer this question straightforwardly, during the off-season, one must go around the whole country and reexamine one’s practice approach.  Actually, if we can see with understanding, the entire mass of earth is the buddhanature.  Where will we find the jewel?  Since the entire earth is the jewel, what will we call the nature?

In your own house is the storehouse of treasure.

Don’t look to borrow it from others.

It naturally arises, there is nothing lacking.