“This sutra is the key to open the infinite Dharmas.  It is the light that dispels the darkness of ignorance.  Just as everything is seen clearly under the bright sun, may we see our true nature by reciting wholeheartedly the Diamond Sutra to give rise to indestructible wisdom.”

The Buddhist Research Division of Jogye Order’s Department of Education completed a new “Jogye Order Standard Diamond Sutra Compilation.”  To commemorate this, there was a Dharma Service at the JogyesaTemple main Buddha hall on January 20.  The new compilation contains the original Chinese and the Korean translation.  A copy for recitation and a commentary have been published separately.  “Academic Forum Review,” which is a compilation from the academic and public seminars, was also published at the same time.

Jogye Order’s Supreme Patriarch Most Ven. Bupjeon’s message was read by Ven. Milwoon:  “This is like scattering flowers over silk.”  In addition, “We should use this as a guide to practice and share the Dharma.”

Jogye Order’s Administrative Head Ven. Jikwan said, “The principle essence of the Diamond Sutra is to give rise to true wisdom, which is the true middle way of true emptiness.”  He continued, “I hope we will correctly understand and apply its meaning.”

The Head of Jogye Order’s Department of Education Ven. Chunghwa said, “Translating and compiling scriptures establishes the foundation of faith, and is an offering, which follows the wisdom tradition of Lord Buddha.”

The head of the committee for the compilation of the Diamond Sutra Ven. Yeon-kwan and from the Buddhist Research Division of Jogye Order’s Department of Education Ven. Yokyung received certificate of appreciation from most Ven. Bupjeon and Ven. Jikwan. 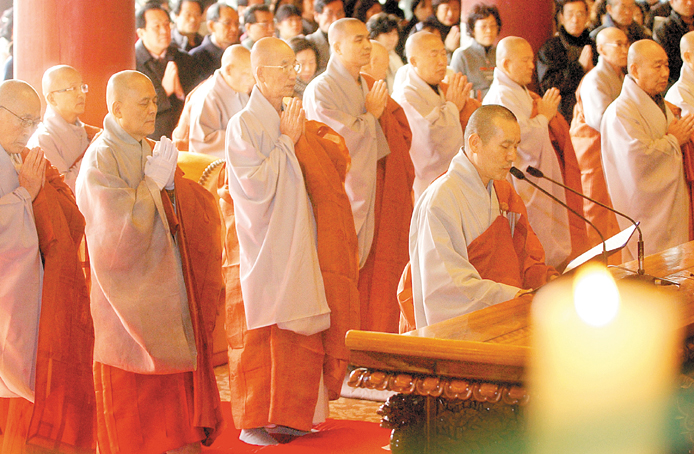