President Lee Myung-bak attended Dharma Service with the Korean Buddhist Order Association at the Grand Hilton Hotel on March 18 with over 1000 in attendance. 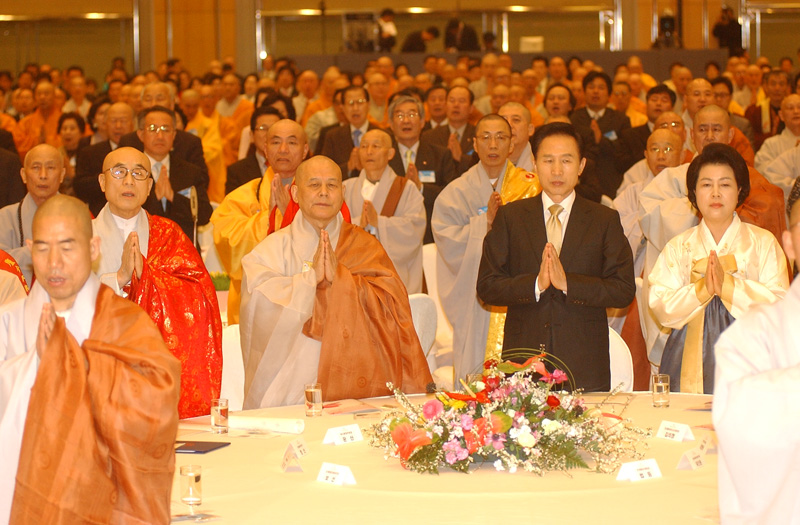 From the Aspiration Prayer:

“Lord Buddha, embodiment of wisdom and compassion!  We pray that you would guide us that the national economy will recover and the citizens’ suffering will dissipate.  In this way, may all of us live together with happiness and cultivate the life of realization and sharing.”

A Dharma prayer service for “national solidarity and overcoming economic adversity” was held with President Lee Myung-bak and representatives from the various Buddhist orders at the Grand Hilton Hotel on March 18 with over 1000 in attendance.

The service began with a video presentation of the Lotus Lantern Festival and a performance by the Bongeunsa Temple drumming group.  Then, the prayer service followed.  After the prayer service, dinner was served.

Jingak Order’s Head Hyejung Jungsa said, “Koreans have a history of overcoming adversity with the light of Buddha’s wisdom and our own aspirations.  We can confirm the strength and history of the 1600 year-old Korean Buddhism.”  He added, “Political leaders, monks and nuns, and the laity gathered here today will determine from their respective places, to overcome our country’s economic and other difficulties with the wisdom of national preservation.”

Taego Order’s Head Ven. Woonsan said, “We, Buddhists here have gathered by finding the methods to live correctly from the teaching of Buddha and applying it in our lives.  We’ve come today with a desire to share this with our neighbors in one mind and one heart.  I pray that the light of the lamp of hope will shine forth throughout the universe to dispel the suffering of beings and brightly illuminate the world.”

Jogye Order Head Ven Jikwan said, “We have gathered here today for Buddhists to take the lead in the solution of the economic difficulties and apply the Buddhist ideology of great compassion to create a society of mutual understanding and cooperation.”  He added, “If we can make efforts to relieve the suffering of our neighbors to become a loving society that cares for one another, then we can overcome any adversity.”

Ven. Jikwan explained the Jogye Order’ program to improve the economic adversity:  On March 27 (Choharu), there will be the 100 won per bow program.  In addition, a part of the lotus lantern offerings will be set aside to help the poor.  There is a new templestay program to restore hope for the unemployed.  There are also new internships at the Jogye Order administrations.  These among other new programs are being implanted to help those in economic difficulty and to make a more mutually caring community.

President Lee Myung-bak said, “Buddhism, which came into our country 1600 years ago, has taken the lead in overcoming national adversities as a Buddhism of national preservation.”  He continued, “With this tradition, Buddhist should take the lead to overcome this unprecedented economic adversity and for the unifying of the nation.”

This Dharma service was attended by representatives from the government as well as Buddhist orders.  Over 1000 were in total attendance.