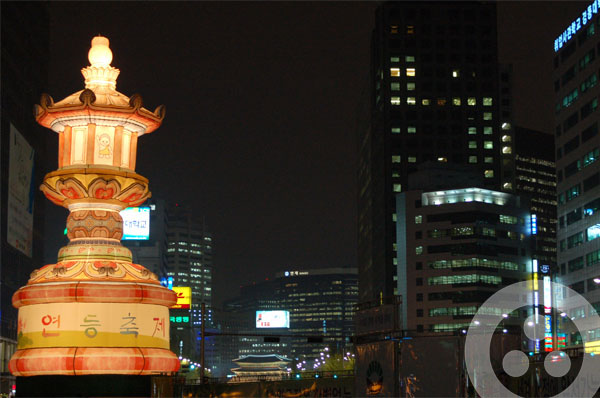 The celebration of the Buddha’s Birthday this year, Buddhist Era 2550, has kicked off with the lighting ceremony in front of City Hall on April 18. This year’s slogan for the celebration is ‘Innocent Mind Buddha Mind’
A balmy April evening witnessed the beautiful moment of lighting the huge stone lantern-shaped monument lantern named ‘Lantern of Truth and Harmony’ at the Seoul Plaza, in front of Seoul City Hall. It was the official beginning of the various celebrating activities of Lotus Lantern Festival. 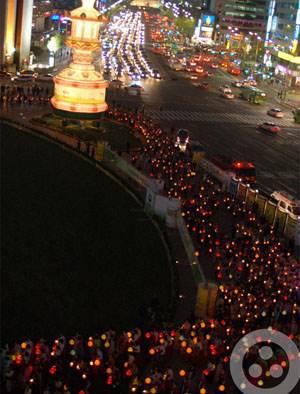 This monument lantern, 8m in width and 18m in height, is shaped after a stone lantern which lightens the temple yard and leads those who seek for the truth. The three valuable stone lanterns which lent their beauty and elegance to this year’s monument are: the stone lantern which remains in the temple site in Yongamri-Treasure No. 267, the stone lantern placed in front of Gakhwangjeon in Hwaeomsa Temple-National Treasure No. 12 and the stone lantern of Silsangsa Temple-National Treasure No. 5.
The Lantern of Truth and Harmony symbolizes the prayers for the social and national integration, easing the bi-polarization phenomenon, conflict between the haves and have-nots or the conservatism and the radicalism, etc. by lighting up the road to the truth, which is the purpose of the Buddha’s coming to this world. This monument lantern will illuminate and decorate the nights of this metropolis together with other 50.000 lanterns which will be hung to the trees and street lights until the Buddha’s birthday, the fifth day of May.
The Most Venerable Jikwan Sunim, Chairman of the Celebration Committee and President of Jogye Order, Mayor Myungbak Lee, the Most Venerable Unsan Sunim, President of Taego Order, the Most Venerable Jeongsan Sunim, President of Cheontai Order, Venerable Beopdeung Sunim, Chairman of Central Council of Jogye Order, Venerable Cheonghwa Sunim, Executive Director of Education of Jogye Order, Venerable Doyoung Sunim, Executive Director of Missionary Activities of Jogye Order, Venerable Jaseung Sunim, Chairman of Celebration Performance Committee, Euijeong Kim, Chairwoman of the Buddhists Association and about 2000 Buddhists and Seoulites were present at the ceremony.