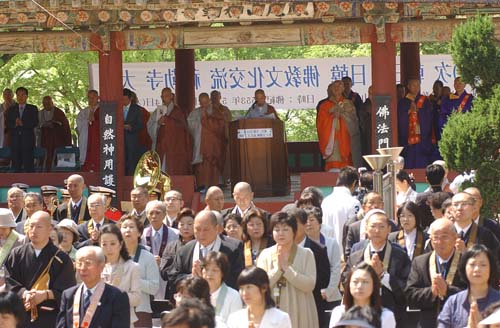 The 30th Korea Japan Buddhist Cultural Exchange Conference began at Shinruksa Temple on May 13, with a 10 a.m. Dharma Service for world peace. In the evening, the Buddhist leaders from both countries met for a presentation of a mutual resolution at Miranda Hotel in Icheon City .

“The Buddhist communities from both countries will recognize history just as it happened to revive continuous efforts for the future. While recognizing the great deficiency of war, we pledge to pray for the casualties of war, to secure the peace and protection of the people, and to make efforts for mutual respect and cooperation.”

The president of the Korea Japan Buddhist Cultural Exchange Collaborative Ven. Jikwan (Jogye Order head) said, “Both Buddhist communities have opened this conference and built a monument for world harmony to ease the suffering of beings and to give hope to humankind longing for peace. Let us forget the painful past, and hand down to future generations the 30 years of friendly relations based on mutual respect.”

The Japanese representative Ven. Shogen said, “There is endless sorry when we think about the young Korean men who lost their lives in World War II. We pray that through contrition, such suffering will never be repeated. We pray that wars in all countries would disappear. Let us make world peace, which is a supreme goal of Buddhism, a reality.”

Along with the Dharma Service, there was an unveiling ceremony for the monument for world peace. Words of Ven. Jikwan and Ven. Shogen are written on the monument. 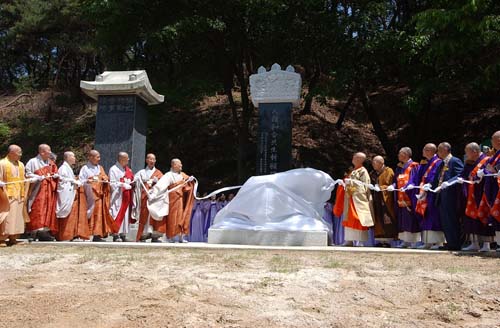 The World Peace Monument has inscriptions in Korean and Japanese. “Today, we stamp the long history of exchange through the stream of friendship between and . We reflect deeply with contrition upon the unfortunate incidences, especially the unimaginable suffering of Koreans during the Japanese occupation. We raise this monument to increase the friendship between our countries and to certify the great responsibility of all Buddhist to pursue world peace. We pledge for a bright future, the protection of humankind, and the remembrance of those who lost their lives at war.”

Representatives from both countries visited the “House of Sharing,” a center for Korean “comfort women.” There was also a visit to the World Compassion Exhibition. The day finished with a seminar and dinner at the Miranda Hotel.