An Article from the Korea Times 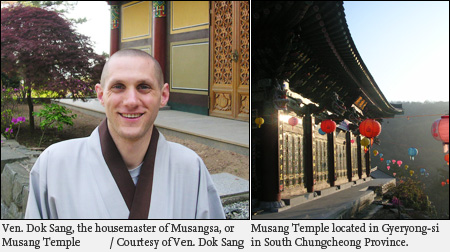 The first time I came to Korea three years ago, I missed Buddha’s birthday by two days. I’d been traveling around East Asia for a couple months and was finishing up my trip with temple stays at Hwagye Temple in Seoul and Musang Temple, which lies just west of Daejeon and is now my home temple. It was during this time that I first met my teacher and began to forge, or perhaps discover, my strong connection with Korean Buddhism.

After two days at Hwagye Temple, I went down to Musang Temple following advice from the director of Hwagye Temple’s International Zen Center, a Lithuanian monk named Bo Haeng Sunim (Ven. Bo Haeng). It was good advice (Bo Haeng Sunim has since delivered large amounts of good advice in his grammatically incorrect and wonderfully enjoyable English diction). I spent a week at Musang Temple. My first morning there I had tea with Zen master Dae Bong. I had never had tea with a Zen master before. I don’t think I’d ever met a Zen master or even had a clear idea of what the title meant. I have now met numerous such people and had tea with a number of them. I still don’t have a clear idea of what the title means. But tea with Dae Bong Sunim was to be a turning point in my life, though I did not realize its significance until recently. I don’t recall many particulars of the conversation, but talking with him felt akin to talking to an old friend. His unreserved American manner and folksy Zen teaching style deliver wisdom and infinite compassion for this world. My meeting with him set the tone for the rest of my time in Korea.

That week at Musang Temple, I worked and talked with the residents, both monks and lay people. It felt like being home. That’s the only phrase that ever seemed to describe my time here. They were in full swing, getting ready for Buddha’s Birthday, and I was able to help prepare for that or working in the garden. I think part of the reason I felt so comfortable was because I could be useful. At the end of the week, I said goodbye to everyone and caught a train up to Seoul. I remember tears coming to my eyes on the train, not a common occurrence for me. They came not so much because I was sad to leave but at the happy thought that a place like Musang Temple existed. I knew I’d return soon.

In Seoul, I returned to Hwagye Temple and stayed there until my departure two days prior to Buddha’s Birthday. I had the interesting opportunity to participate in Seoul’s Buddha’s Birthday Parade. The Muasng Temple family came up and joined the International Zen Center from Hwagye Temple. Before the parade, everyone met in Dongdaemun Stadium for performances and Dharma talks. Thousands of people gathered in the stadium for the pre-parade festivities. Many different groups had prepared dances or choreographed performances, but I most remember the baby monks. I don’t know if I’d ever seen a healthy child with his head shaven before. They were having so much fun playing down on the edges of the stadium and were incredibly cute in their child-size monk’s robes.

Then it was time for the parade itself. Instead of the traditional lanterns, we held flags of the different nations with Korean Zen centers. I was given the flag of Norway ― perhaps I looked rugged and Scandinavian, not having shaved for the two months of my travels. There were dragons and bells and a sea of lanterns all around us as we walked through the darkening streets of downtown Seoul. Everyone was waving to us as we passed. Maybe they were happy to see foreigners enjoying their tradition; maybe they were waving to everyone. At the end of the long walk, we arrived at Jogye Temple, lit up in celebration with hanging lotus lanterns and alive with the vibrancy of thousands of happy people. I left two days later without experiencing Buddha’s Birthday itself.

Since then, I’ve been in Korea for two Buddha’s Birthday celebrations and am looking forward to a third, my first since becoming a monk. I’ve found that my first experiences in Korea and the impressions they made on me are the core of what we celebrate on Buddha’s Birthday. It’s about coming together, acceptance and the simple joy of seeing other people come to celebrate a faith based on compassion for all beings. Keep this in mind always. That’s true Buddhism.