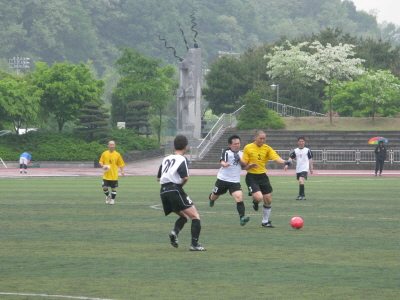 Despite the poor rainy weather, clergymen from four distinct religions took part in a friendly soccer contest on May 11. Buddhist monks, Catholic priests, Christian ministers, and priests of Won Buddhism played soccer for religious harmony and friendship. More than 60 members of the clergy participated. Before the contest, Jogye Order’s Director of Social Affairs Ven. Seyoung said, “I hope that we can meet together often to resolve social conflicts.”

The tournament style contest had the Catholics beating Won Buddhism in the finals. The Buddhists, who lost to Won Buddhism, beat the Christians 2 to 1 to take third. Following tradition, the prize money will be donated to feed the homeless and help the underprivileged.