The first statue of the Future Buddha, which dates back to the Unified Silla Kingdom period (668-935), has been found, according to a prominent Buddhism art professor Thursday.

Moon Myung-dae, former professor of Buddhist Arts at Dongguk University, announced that he had confirmed that the Buddha statue enshrined at the Goseok Temple, Pohang, North Gyeongsang Province, was the sitting statue of Maitreya.

``This statue shows the Maitreya seated on a chair carved in a grotto. This type of statue was a huge trend in China and many were found, but strangely there were only two discovered in Korea: one from the Silla Kingdom (B.C. 57-A.D. 935) and the other from the Goryeo Kingdom (A.D. 918-1392),’’ Moon said.

However, with the discovery of the statue at Goseok Temple, Korea now has three, the most recent one being the first from the Unified Silla Kingdom.

The statue is 222 centimeters high and the width between the knees measures 95 centimeters.

``The statue is quite large. We discovered the Buddha while we were tearing off plaster that was put in place in 1923, and we contacted the professor for appraisal. We thought it was a statue of Medicine Buddha before we tore down the plaster, but it was strange as we could not find the medicine bowl, which is usually found in other such statues,’’ said Ven. Jong Bum, the head monk of the temple.

``As the first sitting statue of Future Buddha from the Unified Silla Kingdom period, we believe this will mark an important moment in Buddhism art history,’’ he added. 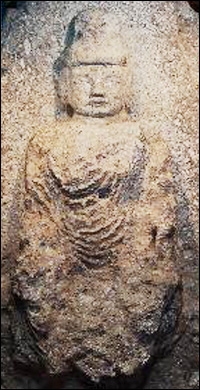 <Photo>The statue of the Maitreya, or the Future Buddha, is seen in this photo. It is the first sitting statue of the Buddha that dates back to the Unified Silla Kingdom period (668-935). The statue is located at the Goseok Temple, Pohang, North Gyeongsang Province / Yonhap