Roh’s Funeral to Be Imbued With Buddhism 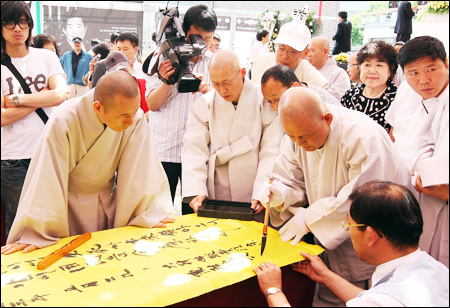 <photo> Ven. Ji Kwan, the executive director of the Jogye Order of Korean Buddhism, writes on a banner for the funeral service of the late former President Roh Moo-hyun, at the Jogye Temple, central Seoul, Wednesday. The temple said it will make some 2,000 banners for monks and citizens who want to pay their respects to Roh. / Yonhap

The last words President Roh Moo-hyun left in a note saved on his computer were: ``Life and death are both just one piece of nature. It’s all fate.’’ He is also thought to have visited a Buddhist temple near his home before he threw himself off a cliff last Saturday.

These last traces of his life indicate that Roh, though christened at a Catholic church, was close to Buddhism. As such, his funeral is to be imbued with some Buddhist rites, with support and condolences from those from within the religion.

He was christened Justus in 1986, but he often stated that he does not have a particular religion. However, he was apparently close to Buddhism given his wish for cremation.

According to aides to Roh, the late Cardinal Stephen Kim Sou-hwan asked Roh whether he believed in God or not during the presidential campaign and Roh answered ``I believe vaguely.’’ Kim again asked why he did not appear to believe absolutely and Roh answered that he was ``wandering,’’ indicating that he was not a believer in any particular religion.

Roh’s aides stated that though the late President was knowledgeable in various religions, he did not favor a particular one.

``Though Roh was baptized and said he does not belong to any religion, he was very close to Buddhism emotionally,’’ an official of the Jogye Order, the largest Buddhist sect in Korea, said. ``He grew up in a Buddhist environment. His mother was a sincere Buddhist and he had a small Buddhist image at his home.’’

He also said that Buddhism is a religion of mercy and comprehension and would have offered the same condolences and help despite the religion of the ex-head of state.

Moreover, Roh’s wife Kwon Yang-sook is a fervent Buddhist. She was given the Buddhist name of ``Daedeokhwa’’ ― the same as the late first lady Yuk Young-soo, the wife of the late President Park Chung-hee ― during the presidential campaign and earned support from Buddhist circles.

Police also found evidence that Roh might have visited Jeongtowon, a Buddhist temple at Mt. Bongha behind Roh’s home, before he went to Owl Rock.

Sun Jin-Gyu, the chief of the temple, is also from Bongha Village, the late President’s hometown. He was a longtime supporter of Roh and the ancestral tablets of Roh’s parents are kept at the temple.

``Roh often visited here before the prosecution started an investigation into him and his aides,’’ Sun said. ``I didn’t know that I would keep Roh’s memorial tablet here.’’

According to Sun, his 49th Day Ceremony ― the memorial service held on the 49th day after a person’s death in Buddhism ― will be held at Jeongtowon as well.

Ven. Ji Kwan, the executive director of the Jogye Order, paid his condolences to Roh in Bonghwa Sunday and consoled the widowed former first lady. The Jogye Order established some 100 memorial altars to commemorate Roh across the nation, including one at Jogye Temple, central Seoul. The Haein Temple sent 300 monks to pay their respects.

Ven. Jeong-u, the head of Tongdo Temple, Monday conducted Roh’s coffin ritual following Buddhist principles and consoled his family. He also suggested the temple’s dhabi facility for the Buddhist way of cremation to the former head of state’s family, but his body will be cremated at Suwon Yeonhwa Crematorium in Gyeonggi Province after a funeral service in Gyeongbok Palace, Friday.

With the funeral a public affair, Buddhist, Christian and Catholic rites will be performed at the official ceremony Friday.