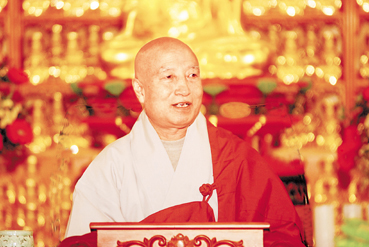 To become a spiritual director (bangjang), a monk or nun must have completed 20 three-month retreats and ordained for at least 40 years, while maintaining a combination of meditation, scholarship, and precepts. The spiritual director can be reappointed after a 10-year term.

Ven. Seoljeong said, “I’m very grateful for the recommendation of the monastic community, and feel the great weight of this responsibility. I will work hard to uphold the teachings of Seon masters Gyeongheo and Mangong to make the SudeoksaTemple and its branches into a pure practice place, and exemplary Korean temples. We will do our best to contribute to the globalization of Korean Buddhism.” 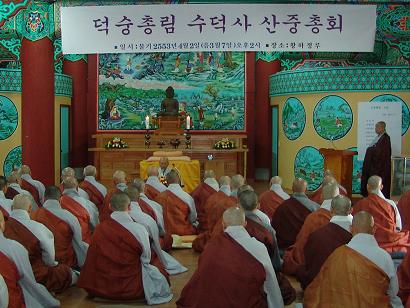 Ven. Seoljeong became a monk in 1955 under the patronage of Ven. Wondam, the former spiritual director. He served as the abbot of SudeoksaTemple , head of legislation of the Jogye Order Reformation Committee, and the 11th Chairperson of Jogye Order Central Council. Currently, he is the spiritual leader (Joshil) of HwagyesaTemple and “suja” (great practitioner) for the SudeoksaTemple family.

After serving as the chair of the central council, he practiced without missing a single retreat season. He meditated at BongamsaTemple , Jeonghye Seonwon, among other places. He holds the Seon tradition of Gyeongheo and Mangong. He is to be the fourth spiritual director of the SudeoksaTemple family following Ven. Hyeam, Ven. Byeokcho, and Ven. Wondam.