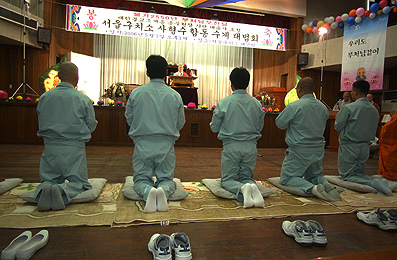 According to Planning Department of Administrative Headquarters of the Jogye Order of Korean Buddhism, the president declared "Compassion is the respect to Life" mentioning the meaning of Buddha’s Birthday. He encouraged the prisoners and prayed for the penitence and health of them. Five condemned criminals received the five precepts on that day.

This Buddhist Ceremony of the five precepts was arranged by the Buddhist headquarters of Campaign for the Abolition of Capital Punishment, sponsored by Jogye Order, presided by Ven. Hyeonjong, the Chief of Research Institute for Buddhist Studies, and officiated by Ven. Jeonghyeon, Department for the Protection of Regulations in Jogye Order. After the speech by Ven. Jin-gwan from Buddhist headquarters of Abolition Campaign, Dharma speech and the five precepts ceremony were led by the president. He also delivered Buddhist beads as well as the five precepts certificates and prayed for the prisoners.

The president, Ven. Jikwan had signed for the abolition of capital punishment last March and expressed “We declare capital punishment as ’Institutional Murder’, which is conducted under the veil of law and system. It deprives the life of human beings which is the most valuable and can not be replaced by anything. We need to abolish the capital punishment in any circumstances and legislate the life sentence to replace it."