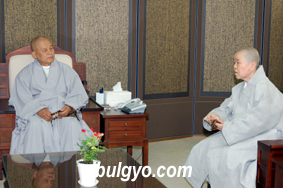 Korean Sunims are expected to ordain the renounced Thai Buddhist female ’Mae jis’, who are banned from receiving official ordination of nuns in Thailand. The ordination service is to be held to ordain around 10 Mae jis, Korean Sunims taking part as precept witness venerables. The representatives of the national Bhikkuni association are due to visit Thailand around 7th to 10th of May during Buddha’s birth ceremony in Thailand to discuss the ordination process with the Supreme Patriarch of Thai Buddhism. The news was delivered by Ven. Myeongseong, president of the national Bhikkuni association at a courtesy call on Ven. Jikwan, president of the Jogye Order of Korean Buddhism on the 2nd of May.

Myeongseong Sunim along with Undal, Gwangok and Seongjeong Sunnim said at that visit, "The Jogye Order has a solemn tradition to ordain precepts by both Bhikku and Bhikkuni and so if President Ven. allows to send 3 Bhikku Upadhyayas (Buddhist teachers responsible for servance of rites, rules, and disciple in a monastic community) and 7 precept witness venerables there, Korean Buddhism will make an epoch of staying in existence within Southern Buddhism."

President Ven. Jikwan said in response, "It is significant to transmit Korean Buddhism to Thailand, so we will consider supporting the project on the Order basis."

The Thailand visit has been arranged as the president of Mahachulalongkorn Buddhist University issued an official invitation of the 13 members of the national Bhikkuni association including president Myeongseoung Sunim and its staff as a delegation to the 60th enthronement anniversary of the Thai king.

Meanwhile, the Sangha Council, the Buddhist Supreme Committee in Thailand, has prohibited females from receiving novice precepts since 1928 and the Buddhist priest law enacted in 1992 has officially denied females to become nuns.

In Thailand about 10 thousand Buddhist females are living as unofficial nuns, ’Mae jis’ as the official way for renounced women to become official nuns has been blocked.