A New Stupa and Monument Completed at JogyesaTemple 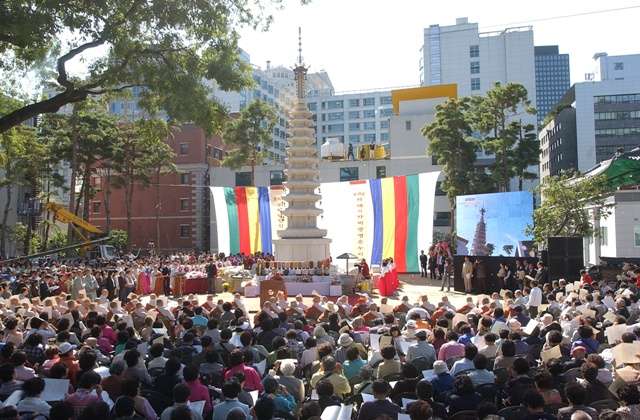 A new stupa and monument have been erected at the Jogye Order’s main temple in Seoul, JogyesaTemple. On October 8, a completion ceremony was held for the stupa called, “Stupa of the Relic of the World Honored One” and “HistoricalMonument of Jogyesa Temple, the Headquarter Temple of the Jogye Order” Jogye Order head Ven. Jikwan began this project in February 2008 in preparation for the 100-year anniversary of JogyesaTemple in 2010. It took one year and eight months to complete. The completion ceremony was attended by more than 5000 people including many eminent monks and nuns.

The stupa contains an actual relic of Shakyamuni Buddha, brought to by Sri Lankan monk Dhammapala in 1913. The monk brought one actual relic of Buddha from the collection of relics of the royal family of Thailand. The relic was housed in a 7-tier stupa at JogyesaTemple in 1914 during the Japanese occupation. After Korea’s liberation from Japan in 1945, there were constant complaints about the stupa being of Japanese style. The new stupa is octagonal (symbolizing the eight-fold path) and ten tiered (symbolizing the ten virtuous actions). It also contains 14,000 small Buddha statues, a set of 7-volume Lotus Sutra from 1660, and a Buddhist ceremonial robe (kasaya) with 25 sections. On the exterior, eight Buddhas and eight Buddhist deities are carved in relief to set a new standard for a distinctly Korean stupa.

In addition, a historical monument, celebrating the history of JogyesaTemple, was also unveiled this day. This monument contains the contemporary history of JogyesaTemple from the struggles during the Japanese colonization of trying to establish a headquarters for Korean Buddhism to the modern, over 80-year-old history of the Jogye Order. The more than 9000-character inscription was written by Ven. Jikwan, the administrative head of the Jogye Order. 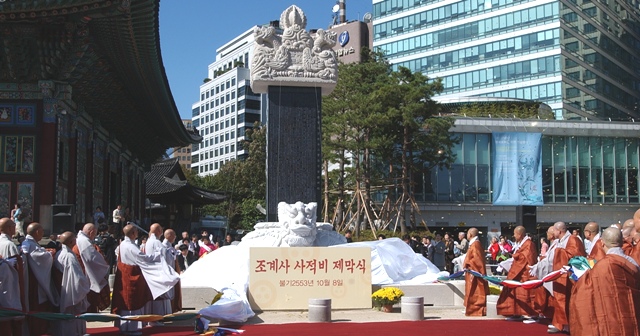