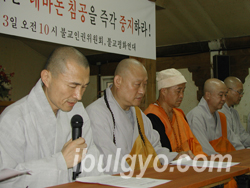 Amid mounting international censure of Israel’s indiscriminate attacks on Lebanon and Palestine, Korean Buddhist social justice groups have called for an immediate ceasefire and a restoration of peace in the Middle Eastern region, declaring the Israeli attack on Lebanon "brutal violence against all humanity."

The Korean Buddhist Human Rights Council (Chairman, Ven. Jinkwan Sunim) and Korean Buddhist Peace Solidarity issued a strong protest against the war in Lebanon at a press interview held at the Discoursing Hall of Jogyesa Temple in Seoul last Wednesday (August 3), declaring that there is no excuse for killing hundreds of innocent people, including many children, and frightening people all over the world. The groups also criticized the United States and Israel for “conducting the most mean and merciless war in the world."

The two Korean Buddhist organizations emphasized that Buddhism upholds the importance of peace and reverence for all life. Buddhist teachings decry all forms of war. They called for an immediate end to air strikes by Israeli forces, declaring that they will unite all peace-loving Buddhists in the world to achieve positive consequences for all involved. They also made it clear that, in light of the compassionate grace of Buddha, they will fight against all harmful misdeeds until justice is established on earth.

At about the same time of the press conference, a number of Buddhist civil organizations in alliance with about twenty other non-religious civil associations, held a joint press interview in front of the U.S. embassy. They subsequently marched to the embassy of Israel chanting slogans denouncing the Israeli attacks on Palestine and Lebanon. (Reporter Bae Jae-su, dongin2@ibulgyo.com) 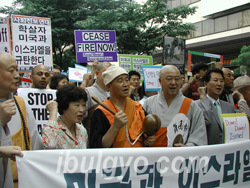 The Korean Buddhist Human Rights Council and Korean Buddhist Peace Solidarity hereby declare that the Israeli attacks on Lebanon are a merciless outrage to humanity. We demand an immediate cease to the Israeli attacks on Lebanon. Are not these barbarous acts contrary to the teachings of the God of love, freedom and peace? Perhaps reflection and repentance are in order? Would a God of love allow anyone to kill innocent children? Can a God of love be a God of death?

There is no rationale to justify killing hundreds of innocent people and terrifying the people of the world. We ask the United States and Israeli government to realize that they are conducting a mean-spirited and merciless war. Inspired by Buddha’s teachings of love and great compassion for all living beings, we add our voice to the peace- loving peoples of the world who denounce this brutal conflict. With the tears and broken hearts for the families of the innocent victims of indiscriminate bombing. we sincerely implore you to stop this heartless aggression

As followers of Buddha’s teachings, we pity the ignorance and meanness of any government that conducts or instigates war. Israelis, who have suffered greater trials for centuries than any other people in history, must know what it is like to be the slaves of irrational violence and exploitation. The United States must also learn from the rise and fall of the Roman empire.

They must realize that even Israeli soldiers have come to realize the abhorrence of the war, according to the news. They must also listen to the voice of peace loving people throughout the world. Who can claim "the axis of evil" and "the rogues" of the world? Who is behind the bloody war supplying the deadly weapons? Who is waging the war mouthing “freedom and peace and compassion?” Who is deceiving themselves and the whole world?

The United Nations and all international organizations must oppose the war. The United Nations must stand firm and take drastic action against inhuman actions. We think making face-saving announcements are not enough. This venerable international organization has a sacred duty. It must not disgrace itself by becoming a puppet of any national power.

Some countries are denounced as terrorists. But we must understand that they are trying to defend their own culture, belief and homeland. Terror seems to be their last desperate resort. We must realize that retaliation breeds more retaliation. We must not deceive ourselves. We all must join together to stop this conflict. We must defend our lives and the rest of humanity from continuing war and violence.

Buddhism is a religion of love and peace. It upholds the sanctity of all life, no matter how mean, small or seemingly insignificant. Buddha taught the fundamental principles of the universe, beyond the doctrine of any religion. Most of all, Buddhism opposes any all violence. We thereby declare, with the support of peace-loving peoples of the world, an immediate cease to all air strikes in Lebanon. We all have the right to exist peaceably in a just world, free of violence.