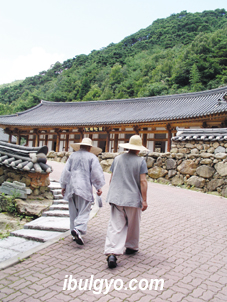 A total of 2,225 monks completed their practice in 94 different seon centers
located around korea during this year’s summer retreat period.

According to the recent figures in this year’s "summer retreat Seon centers
current overview" revealed by the congregate of head monks in the nationwide Seon
centers, it was found that 1,258 monks practiced in 59 bhikku Seon centers including
those of full monastic training temples(Chongnim) throughout the whole country and 967 bhikkuni(Nuns) practiced in the 35 nationwide Seon centers.

On the occasion of successful conclusion of this year’s summer retreat, The Venerable Jijong, spiritual patriarch of Gobul-Chongrim expressed in his summer retreat dharma talks that "Buddha is the state of clean mind and Buddhist Dharma is the reflection of light of wisdom(Prajna) and so, the way leading to enlightenment is the clean light(purity) with no obstacles at all".
He also added that these three elements are the same and mutually understood and they are emptiness without real substances.

All the monks completed their practice at each Seon center around the country began to move their steps. The Seon centers in the Chongrim temples such as Jogye, Youngchuk and Deoksung were also included in the summer retreat.

Picture: The seondung Seon center monks in Hwaeomsa temple are returning to their places after pohaeng(lightly walking) to continue practice on 1 August, a week prior to the end of summer retreat.