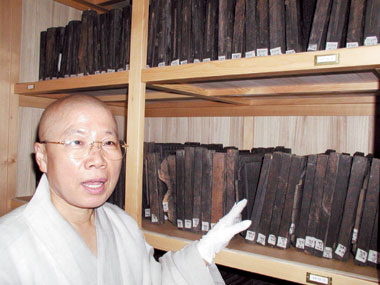 The Central Museum of Buddhism, located at the underground floor of the JOKB Memorial Hall of History, finally revealed itself on Aug. 9th. It is expected to open a new era for the Buddhist Community to be able to preserve and manage its treasured temple relics in the best storage facility in this country.

JOKB(Jogye Order of Korean Buddhism) revealed the state-of-the -art repository in the Central Museum of Buddhism to the press for the first time in history.
The repository, according to a person concerned, is equipped with the best preservation system, a security system providing constant temperature, humidity rate and almost perfect protection against possible dangers like fires.
The repository first opened to the press on Aug. 9 consists of three repository halls, one front room and one dissection room on the premise of the memorial hall. A room for conservation treatment will be added next door to it as well.
Hong-Sik, Kim, one of its researchers, rated the repository as follows; "The quality of our facilities is on a par with that of the National Museum of Korea relocated at the Yongsan area, and except for its smaller dimension, it is one of the best in Korea."
Currently the Central Museum of Buddhism has installed in its repository about 770 items of relics including those transferred from Dongkuk Univ. and the National Museum of Korea. The museum is also planning to repatriate other legacies scattered at various places in two or three months.
Among the three repositories, the first is to preserve stone relics and roofing tiles which are relatively not sensitive to the temperature and humidity, the second to store wooden or metal-made Buddhist statues and craft items, and the third to store various paper-made paintings and books. After due consideration of its underground location, storage items have been arranged distancing about 30cm from the walls and installing ventilators in order to prevent harmful gases released from concrete walls from damaging the relics. And the thermo-hygrostat can keep a 60% humidity and 18 to 20℃ temperature constantly around the clock. Especially in the second repository for metal-made items, special air-tight facilities can successfully block the inflow of outside air tightly and keep 40 to 45% humidity level constantly.
In order to guard against the possible damage, there are protections like the paulownia-made storage facilities, humidity-controlling wall-faces, and traditional Korean paper which does not allow any chemical reactions to the storage and which also keeps constant ph7.0 level. Hi-tech halon gas sprayers also can be an effective protector against any fire incidents.
"The repository will take in custody Buddhist cultural assets owned by individual temples not equipped with its own museum, also promoting self-awareness of temple relics by repatriating them from other entrusted institutions." said the repository authorities.