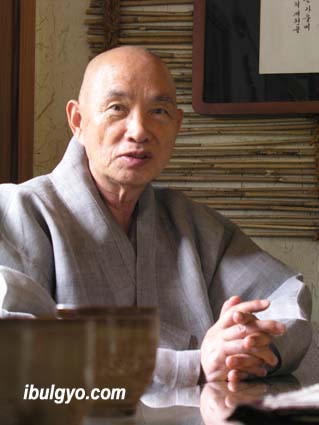 Doyoung, the Executive Director of Missionary Activities, is soon to retire from the directorship on September 4th, 2006, right after the official retirement ceremony at the Korean Museum of Buddhist Culture and Heritage. The director Doyoung is to be remembered as the first director who has successfully completed his term of service, 5 years, since the Bureau of Missionary Activities has become an independent Bureau. Having worked especially hard on preaching the Military personnel, Doyoung established the Buddhists’ education system in August, 2001 and separated the Military Buddhists’ special district from the Bureau of Missionary Activities as an independent District Head Temple. The following is from an interview with Doyoung at Songgwangsa Temple in Wanju.

How do you feel about the past 5 years working as Executive director of the Bureau of Missionary Activities for the Jogye Order of Korean Buddhism?

I feel that a lot more could have been done than what has already been done. It is time for me to leave, though. I am sure the next director will do what has been missing, and the working staff members will continue as usual. Thus, the rest of the missionary activities will continue without any problems.

What have you been most interested in as Executive Director?

The most important project was to "raise one million Buddhist enthusiasts". Buddhist Enthusiasts can be defined as someone who is educated as well as religiously active. To raise one million Buddhist enthusiasts, I have regularized and systemized the Buddhists education organization/procedures. Any Buddhists should learn the Buddhist fundamentals, "Introduction to Buddhism", receive the Buddhists Five Precepts and obtain the Buddhist’s certificate. I have also worked on the academic quality control of 1-year Buddhist colleges as well as on the development of the preaching documents and educational materials.

You have launched the Military Buddhists’ Special District temple as an independent District Head temple. As we know, it has been one of the most heatedly debated issues for the Jogye Order of Korean Buddhism. What are your thoughts on this?

Korean Buddhism is particularly vulnerable and weak in youth programs including programs for children and teens. Therefore, as an alternative, an extensive preaching program for the military personnel is, without doubt, very important. The military service period for Korean young men is relatively short and when they return to the society after the service period is over, they are all potential buddhists. It should be noted that we are not the only ones, as the Catholics and the Christians pay special attention to the preaching of the young. The Catholic churches assign their nuns near the Nonsan Military Service Training Camp in order to preach the young men enlisted in the Korean army, and we, too, should allow the female buddhist monks to be the Military Buddhist master.

Your major contributions include the building up of diverse buddhist organizations. What are your feelings about that?

I have tried to establish a solid infrastructure in preaching Buddhism by supporting diverse buddhist organizations. As a result, the Korean Buddhist Institute of Counselling became incorporated, and the next in line is the Buddhist Women’s Development Institute. Keep in mind that the diverse functions and missions of all these Buddhist organizations are not only important but also imperative. They are the foundation of the local Buddhism in the nation.

What are the limits and weaknesses of your work?

I have felt so many barriers; for example, in my opinion, it is not clearly defined what the Bureau of Missionary Activities is. Even inside the Headquarters of the Jogye Order of Korean Buddhism, Administrative Headquarters, Education Bureau, and Missionary Activities Bureau are independent and yet the ultimate goal of the organizations is to expand the Buddhist population. Another yet-to-be-accomplished is the foundation of Buddhist Association for Korean Entrepreneurs. We could have organized a fund-raising event for Buddhism and launched an association for Buddhist’s mountaineers.

Upon your retirement, any last words for the Jogye Order of Korean Buddhism?

I had worked as Director of General Affair Department for four years, which means that I have worked for the Joyge Order Headquarter nearly for 10 years. As things come and go, I believe I have done enough. After returning to Songgwangsa temple that I had left untouched for a while, I will make sure that the temple can be a peaceful and relaxing area, which functions as a home to many local buddhists and for the community.