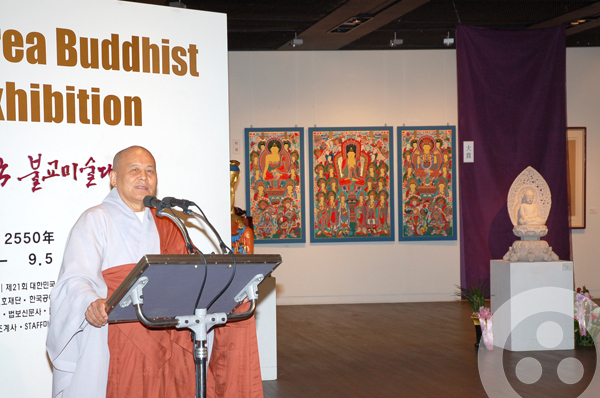 The 21st Buddhist Art Exhibition has opened on August 30 at Insa Art Center in Seoul with the presentation of prizes of the winners. The Exhibition lasts from August 30 to September 5.

The Exhibition Ceremony started with the vow of Threefold Refuges, recitation of the Heart Sutra, and congratulatory address of Ven. Jikwan, the Executive Director of Administration of Jogye Order: "I congratulate for all the winners of prize and all the contestants who have shown their talents through this Buddhist art contest." He also said that "As the silent truth is the supreme truth, and the formless truth is the supreme truth, all the exhibitions are the finest arts. Once again I would like to express my sincere appreciation for all the contestants and the honored guests of this ceremony." 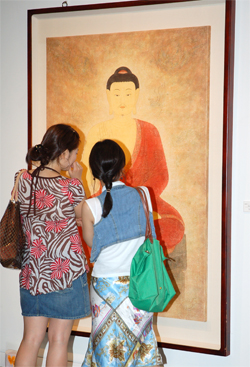 Kim Myeong-gon, the Minister of the Ministry of Culture and Tourism, said in his congratulatory address, which is read by Kim Jang-sil, the Chief of the Religious Affairs, in lieu of the Minister, that "The 21st century is the age of culture, and the creativity of culture will be the main force of the development of the society. The quality of culture will also be the competitive power of the country in the cultural age of the new millenium. In this sense, this Buddhist Art Exhibition is very meaningful for the creativity and appreciation of arts."

The Grand Prize went to "Shakyamuni Buddha" by Nam Se-jin, the Golden Prize to "the Threefold Venerable Buddhas" by Lee Gyeong-ah, the Prize of the Minister of the Ministry of Culture and Tourism to "Arhat" by Yun Si-na, and the Prize of the Director of the Administration of Cultural Property to "the Gukdang Chomun Rosary Case" by Jang Chae-weon.