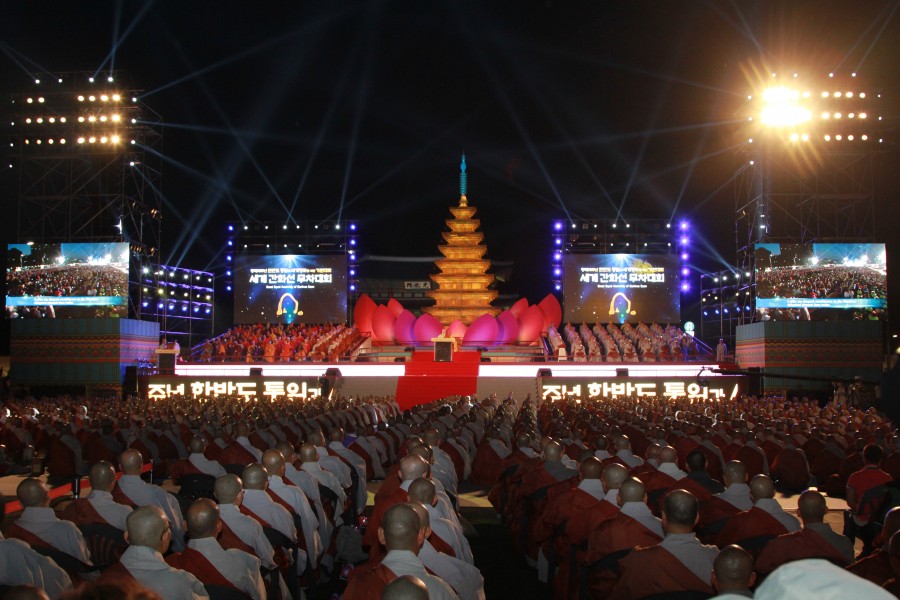 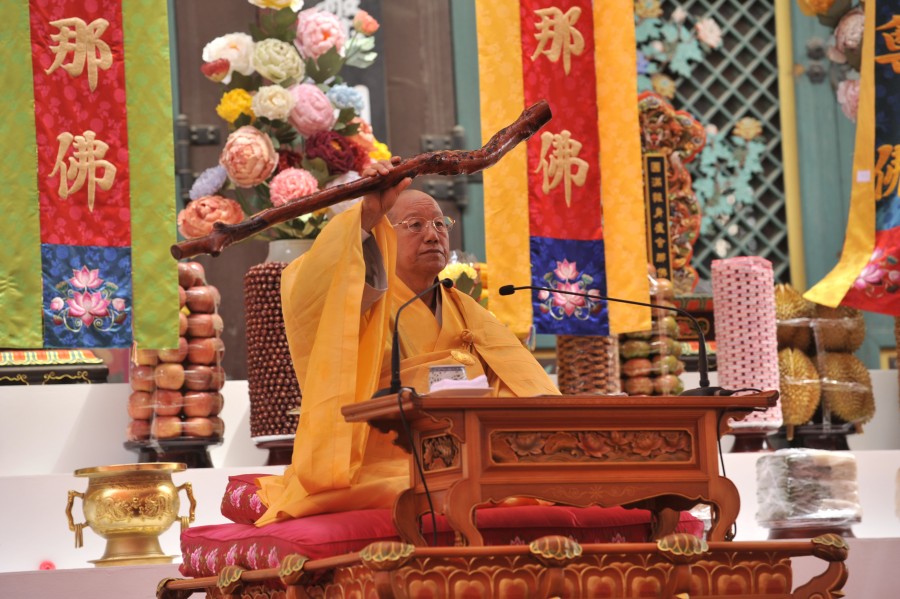 Conference for World Peace and Reunification of Korea,

“You are a Buddha... May you all respect one another and lead a mutually sustainable life." This is the Dharma message of the Great Seon Master Jinje, Supreme Patriarch of the Jogye Order of Korean Buddhism

The Gwanghwamun Square resonated with Buddhist chanting and prayers to realize world peace and the reunification of Korea through the Buddha's wisdom and compassion.

At 6:00 pm on May 16, Gwanghwamun was colorfully decorated with the five cardinal colors of lotus lanterns and filled with 320,000 people who attended the "Great Equal Assembly of Ganhwa Seon." The Great Equal Assembly refers to the traditional Buddhist Dharma meeting open to everybody, regardless of social class, wealth, age, etc. This follows the spirit of dana (an act of charity and generosity in material or spiritual form, without expectation for reward). This assembly aimed first to pray for the reunification of Korea and world peace and secondly, to promote Gwanhwa Seon, the most representative Korean Buddhist traditional meditation practice.

The assembly began when the lotus lantern parade, with its variety of teams and colorful lanterns, arrived at Gwanghwamun. It had departed from left Donguk University and passed through Dongdaemun and Jongno. The sound of the Dharma drum on the stage at Gwanghwamun announced the beginning of the Assembly and at the same time in Jogyesa Temple, the Dharma Bell tolled five times to pray for global peace.

Venerable Jaseung, the President of Jogye Order of Korean Buddhism, moved up to the stage and made a speech to the audience. He stated, "I pray for the spirits of those who lost their lives in the disastrous earthquakes of Nepal to be reborn in the Pure Land, and for all the citizens of Nepal, including the families of the victims to overcome this crisis with wisdom and courage. I offer my deepest condolences to the Nepalese delegates present here today." He added, "Korean citizens also still share unbearable suffering in the aftermath of the Sewol Ferry disaster. Through a speedy salvage of the sunken Sewol Ferry and a thorough investigation of the incident, I hope Korea may progress onward to a safer and more trustworthy society."

​He then made an announcement of “2015 Declaration of Reunification by Korean Buddhism for Lasting Peace on the Korean Peninsula." It began by "Let us open the path of reunification through peaceful coexistence, mutually sustainable ways of life and the unity of minds." He continued, "To be able to reconcile and exist together, we must let go of the self-centered tendency that tells us only I am right." At the end of the announcement, all heard the sound of jukbi (bamboo clapper) and were led into the meditative state in their respective ways for 5 minutes. In its grand silence, all prayed for the reunification of Korea and the world peace.

The Dharma talk of the Great Seon Master Jinje, Supreme Patriarch of the Jogye Order of Korean Buddhism, was then held. Seon Master Jinje mentioned, "People in today's society tend to think the salvation of self is enough and all wrongs are the fault of others. Thus cultivation of character cannot be emphasized enough." He added, "Whoever has awakened to their pure mind and attained the true self can enjoy eternal happiness and great wisdom. And to realize that a person is a Buddha and to respect and live a mutually sustainable life are the vows we must make today."

At this Assembly, the Prayer for World Peace, finalized in the Religious Conference for World Peace, was publicly announced. It was discussed and adopted by the 20 representatives of each country’s delegates in one of the events called Religious Conference for World Peace held at 2:00 pm on May 16 at The Grand Hilton in Seoul. In this meeting, they agreed to condemn all violence in the name of religion and pledged to cooperate to bring happiness to all of humanity and peace to the world by putting an end to all conflicts and confrontations on earth. They vowed to cooperate fully in all interfaith dialogues and exchanges, and to strive for religious harmony and world peace.

The Great Equal Assembly of Ganhwa Seon was recorded as an unprecedented event in the history of Korean Buddhism with its 320,000 attendees including the 200 overseas Buddhist monks from 20 different countries. Some of them made a visit to the Sewol ferry booth in Gwanghwamun Square and offered their deepest condolences to the bereaved families. On the 16th morning, all 200 overseas delegates paid their respects at Seoul National Cemetery and on the 17th morning, they attended the Great Equal Water and Land Ceremony, a traditional Buddhist ritual, held in Jogyesa Temple, that consoled and liberated the spirits of all the deceased who sacrificed their lives during the Korean War, including those from North Korea and China.