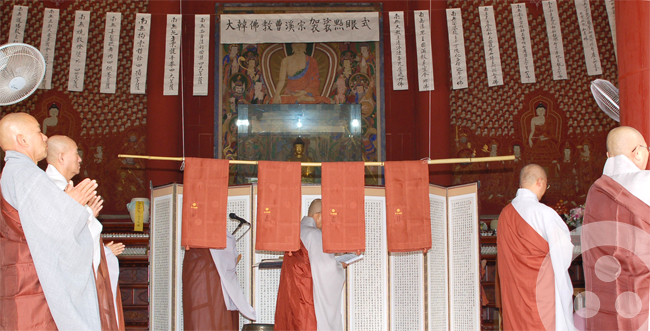 At 9 a.m. on September 19, 2550 (2006) based on Buddhist calendar, the Jogye authorities performed a Robe Jeoman Ritual, designed to breathe a new life into Buddhist robes regarded as a symbol of Buddhism. The ritual was conducted to unify various types of Buddhist robes and thereby to bring a wide array of Buddhist organizations into a line. The ceremony was presided over by two Buddhist priests - Wonmyeong Sunim (Chairman of the Buddhist Funeral Music Maintenance Organization) and Jeongoh Sunim.

Since its launch, the Jogye authorities has seen the 1st ceremony of the kind, through which some 500 Buddhist robes following the 25th Daejong-sa and the 21st Jong-sa lineage robe models will be handed out.

Robe Jeoman Ritual is Korea’s unique Buddhist tradition, designed to celebrate successful achievement of making Buddhist robes with clear and one mind. This ritual accordingly is considered a ceremony to bring a new life into Buddhist robes symbolizing Buddhist teachings.

Under the time-honored tradition, the Buddhist robes are usually considered valid as a vessel to deliver Buddhist teaching only after they undergo the entire process of Buddhist robe ritual.

The ritual starts with seeking support for Buddhist robes. It requires all of those concerned –seeker, volunteer and supporter- to maintain clear minds throughout the process. In particular, leap month is traditionally considered appropriate for performing the ritual.

Typically volunteers make the Buddhist robes against the backdrop of portraits of three Buddhist priests -Zhikong (India), Naong (Korea) and Moohak (Korea)-. The practice is intended to enshrine the Buddhist teachers as a proof to take the volunteers’ refuge to three treasures – Buddha, Dharma and Sangha-. The three Buddhist monks mentioned above are still respected for their devotion to waking up sentient beings by performing Buddhist practice throughout their lives. The Buddhist robe ritual goes through the procedures like robe Jeoman, robe delivery and robe wearing.

Jikwan Sunim, Chief Monk of Jogye Order said, “Wearing robe is a Buddhist practice itself. This ceremony will mark a starting point of distributing unified shapes and colors of robes and thereby giving more motivations to Buddhist practitioners.” He added, “In particular, I’d like express my sincere appreciation to Bikkhus, Buddhist followers and volunteers for helping distribute these unified colors and shapes of robes.”

The Buddhist robe ritual aims to enlighten sentient beings by connecting them with monks and Buddha. In addition, it is designed to encourage helping mind and lead the way to enlightenment through encounter with Buddhism.