Gamal (male, 40), from Sri Lanka, works in an industrial complex around Dongducheon area. He has been in Korea for more than five years, but he couldn’t have a chance to return to his home country. One of his few comforts is visiting the temple with his friends, and makes a wish. 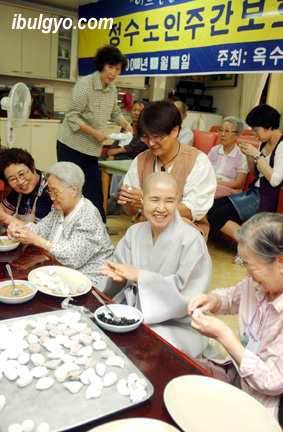 < ”Wish that moon festival lasts long” Last Sep. 22 (two weeks prior to Moon Festival), in Seoul Oksu public welfare center, lots of peoples (aged persons, center staffs, volunteers, and director Sangdeok sunim) gathered around to make a rice cake. To share the happiness of Moon festival, public welfare centers, which are belong to Buddhism, will prepare many ceremonies. Those ceremonies are aimed for the sharing of love with isolated neighborhoods.>
Last year, by chance, Gamal joined the Buddhist ceremony for migrant workers at Jaje temple in Dongducheon. At that time, he could feel the warmth of Korea. He played the traditional Korean games with his colleagues, and it was been such a long time that he could relax and smile. Recall last year, he said,
“Thank you so much Korean, and specially thanks for sunims.”
In fact, the event was a kind of relatively small party. However, head monk of Jaje temple realized that this small event can be an unforgettable memory for someone who needs cares. “Every harvest moon festival, we will host this event, so please come and joy.” Head monk gave his word to Gamal.
During Korean holidays, migrant workers feel loneliness. So, lots of temples are planning for sharing the harvest moon festival with them. Dongducheon Jaje temple (head monk Beophae sunim) will hold a Buddhism ceremony for foreigners and rice cake sharing party in coming October 1st at 10 am.
Korea traditional games, such as playing yut and playing shuttlecock with feet will be placed, and amateur singing contest will also be held. About one hundred migrant workers from Sri Lanka, Bangladesh, Nepal, and China, will be participated. Also, temple prepared sutra, which is written by English. This sutra will be used for the propagation of Buddhism and English Buddhism ceremony.
Maha-buddha Gumi Bohyun’s resting place (principal Jino sunim) will hold a 7th harvest moon festival for migrant workers in coming October 1st. About one hundred migrant workers from Sri Lanka, Indonesia, Vietnam, and Philippine will make a rice cake, and try traditional Korean dress. Also, till October 8th, the place will be opened to anyone. Jino sunim said,
“I wish that this event can contribute to the understanding of Korean culture for migrant workers. Also, this event may increase their work efficiency since they can enjoy a totally new leisure, which will excite their interests.”
<Events>