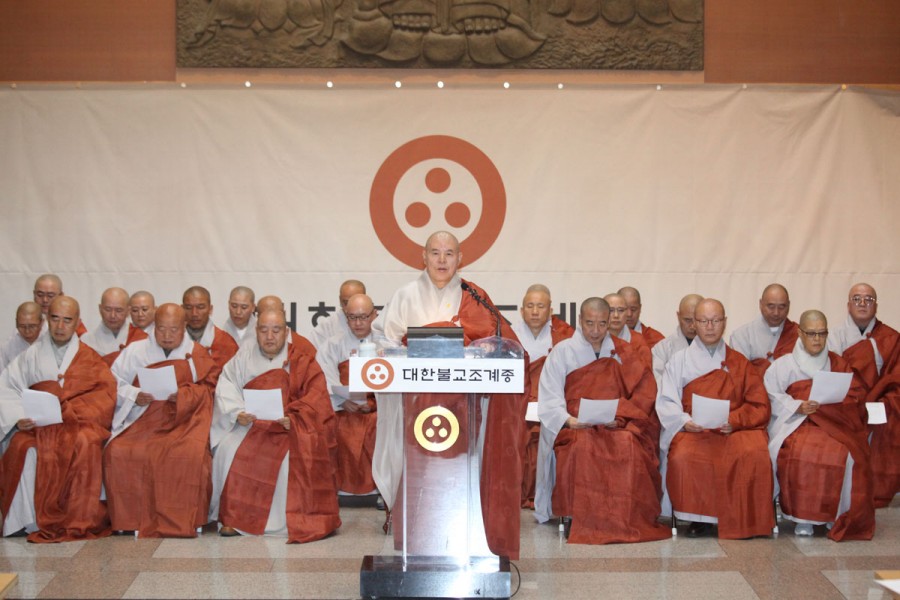 The Jogye Order’s Official Appeal to the Park Administration on Dec 6, 2016

The Jogye Order of Korean Buddhism announced its official appeal to the Park Administration on Dec 6, 2016 at the lobby of the Memorial Hall of Korean Buddhist Culture and History regarding the current political scandal involving Choi Soon-sil, the President Park’s so-called ‘shaman advisor’ and daughter of the Korean Shamanistic cult leader, Choi Taemin. Ven. Jaseung, the President of the Jogye Order, addressed that the only and best way for the President to do for the sake of the country and people is the unconditional and immediate resignation under the current circumstance.”

The Jogye Order’s Official Appeal to the Park Administration

Just like lotus flowers blossom above the muddy water, millions of people have been storming the streets nationwide, holding the candlelight aloft and rewriting the history of democracy on this land. The Jogye Order believes that the current outcry of people lays the foundation for rescuing the wrecked Korea from the chaos, disorder, and crisis and for building a new country of hope for the future.

‘歸根得旨 隨照失宗 Gui-geun-deuk-ji Su-jo-sil-jong’: One can achieve the original purpose if he or she returns to the root, but lose the root if only seeking immediate gains.

Keeping this verse in the mind, the President must take the voice of people as the voice of heaven. The only and best way for the President to do for the sake of the country and people at this moment is the unconditional and immediate resignation. We have heard enough of what the general public wants. The President should resign as soon as possible not to further trouble the public in this cold winter.

Currently, both the national and international situations around Korea are  not favorable at all. It is extremely important for us to fix and reorganize the national system as soon as possible and prepare for any possible emergencies, domestic and foreign. President Park should now make a decision to step down.

All the politicians, including the ruling and opposition parties, are never free from the responsibility and obligation over the current scandal. They said that they understand the public sentiment but it was revealed that they did not. They said that they work for the nation, but it was also revealed that they did not. They should confess and stand in a white sheet for their incompetence and complacency. This is the last chance for the politicians. They should direct all their energy and power to make impeachment of the President successful, not being unsettled or changing by the immediate party interests.

The unprecedented scale of candlelight vigil in the history worldwide is happening on this land. People make solutions among themselves to crash through the current crisis and pave the road for the just and fair society and more hopeful country. Just like the candle that brightens the world by burning itself, countless people take troubles to go out to the streets every weekend, throwing off the dreadfulness and distrust together, and making a strong driving force for the better future.

All monastic in the Jogye Order of Korean Buddhism will continue to keep rigorous self-discipline, making unfaltering endeavor, in order to contribute to the successful ending to the current national crisis as rapidly as possible and to pray for a more mature country of democracy and justice by taking this crisis as a national critical lesson in the history.