Meet Himalayan Buddhism at the Heart of Seoul 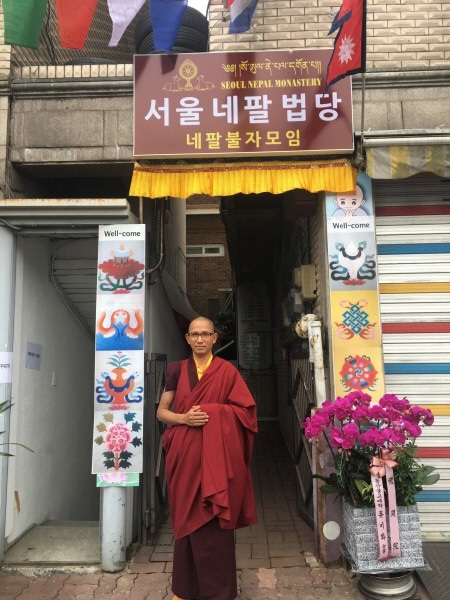 At the opening ceremony of the Monastery, Ven. Kunsang Dorje Lama said, “The Seoul Nepal Monastery is opened to all Nepali Buddhists, migrant workers and Koreans who want to know about Nepali Buddhism and wish to pray and meditate. Dharma assemblies will be undertaken in both Nepali and Korean ways for the cultural exchange between Himalayan and Korean Buddhism. It is my sincere hope that this Monastery could serve as a place at which Korean and Nepali Buddhists could deepen their understanding about each other’s culture. Although we still have a long way to go, I intend to develop this place into a bridge builder between the two Buddhist communities.”

Having dedicated himself to learning about Korean Buddhism and spiritual practice over the last 12 years at Bogwangsa Temple, affiliated to Bongseonsa Temple in Namyangju City, Ven. Kunsang Dorje Lama came to assume the duty of leading the Seoul Nepal Monastery. While meeting a number of migrant workers in Korea, he has often heard regrettable voices over the lack of places for prayers and meditation. “Inspired by the fact that there are numerous migrant workers from Nepal and Nepali Buddhists as well as Buddhist temples, monastics and lay Buddhists in Korea, I thought a Nepali Monastery in Seoul could bring both Nepali and Korean Buddhists who have upheld the spirit of the Buddha in different cultural backgrounds together,” Ven. Kunsang Dorje Lama shared his motivation at the opening ceremony.

The Monastery was managed to be established in a small rented area on the basement floor with the help of a couple of Korean temples, such as Guryongsa in Seoul. Defying the abbot’s worries about low turnout, the small-sized Monastery was crowded with diverse attendees. Mr. Lama Kkeolmui, who came from Chungju City with his two daughters, expressed his feelings, “I think I will frequently visit this place from now on, because this is a Nepali Monastery led by a Nepali monk. I am very glad that now I can share my worries and difficulties in adapting to life in Korea with other fellow Buddhists from my homeland.”

The opening ceremony of the Monastery was highlighted by the attendance of Ven. Jeongwoo, the Elder Master of Guryongsa Temple in Seoul, who provided financial support for the opening of the Monastery, and Ven. Jisang, Deputy Director of the Department of the Social Affairs of the Jogye Order of Korean Buddhism Headquarters, who said in his congratulatory remarks, “I look forward to seeing the Seoul Nepal Monastery serve as a place of spiritual solace for Buddhists from Nepal.” Mr. Kiran Shakya, Chargé d'affaires of the Embassy of Nepal in Seoul, also expressed his gratitude for the opening of the Monastery for Nepali people in Korea.

Members of the Seoul Nepal Monastery plan to organize special Dharma assemblies on the occasion of Buddhist holidays celebrated in both Nepal and Korea as well as Sunday Dharma Assembly. Ven. Kunsang Dorje Lama asked for the attendees’ continuous support for the sustainable management of the Monastery, while highlighting his commitment to providing advice for and resolving difficulties of migrant workers in Korea by making the place easily accessible.