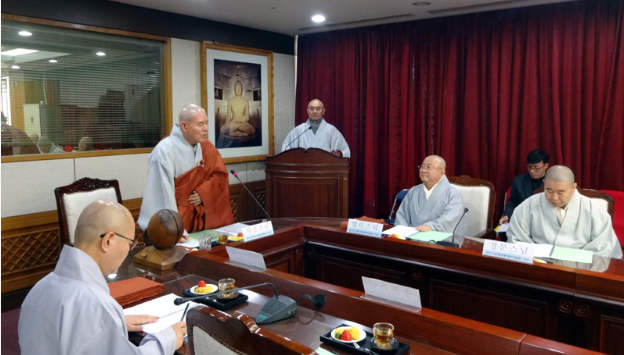 Singyesa Repair Project and Commemorative Events to be Held,

Marking the 10th Anniversary of the Restoration of Singyesa

Marking the 10th anniversary of restoring Singyesa, the symbol of inter-Korean exchange in the Buddhist community, the Headquarters for the Unified Korea of the Jogye Order plans to diagnose and repair the buildings of the temple. Commemorative discussion and exhibition will also be held in September. The organization led by Ven. Beopta held the regular meeting of the Board of Directors in the Buddhist Era 2561 and approved initiative plans for 2017 at the meeting room located on the 4th floor of the Center for Korean Buddhist History and Culture on February 14.

The upcoming project for the diagnosis and repair of the Singyesa buildings is intended to shed light on the significance of the temple which signifies inter-Korean Buddhist cultural exchange and to continue constructive communication in a sustainable manner. The Department of Cultural Affairs, Research Institute of Buddhist Cultural Heritage and Central Buddhist Museum of the Jogye Order plan to work together for the project from June to October.

In September, the 10th anniversary commemorative discussion on restoration of Singyesa and exhibition which will showcase photographs of previous restoration processes and documents, including the Joint Agreement between the two Koreas, are scheduled to be held in September at the Center for Korean Buddhist History and Culture. In addition, a joint Buddhist ceremony of the North and South Buddhist communities is planned to be organized in October. A working-level meeting between the Joseon Buddhist Federation and the Headquarters for the Unified Korea is going to be held for discussions on detailed plans for commemorative projects in March.

With the changing landscape of unification and policies toward North Korea, the organization also aims to sign an MOU with the Institute for the North Korean Studies of Dongguk University to focus on research projects on unification policies. In addition, regular lectures, educational sessions about unification, such as the 5th Buddhist leaders’ course, rice farming project and DMZ Train for Peace project are planned to be offered in the near future.

Ven. Jaseung, President of the Jogye Order of Korean Buddhism Headquarters, said, “Our society is faced with chaotic crisis at the moment and the same is true for the inter-Korean relations. I look forward to seeing more social stability which can smoothly improve the tasks and challenges between the two Koreas”.