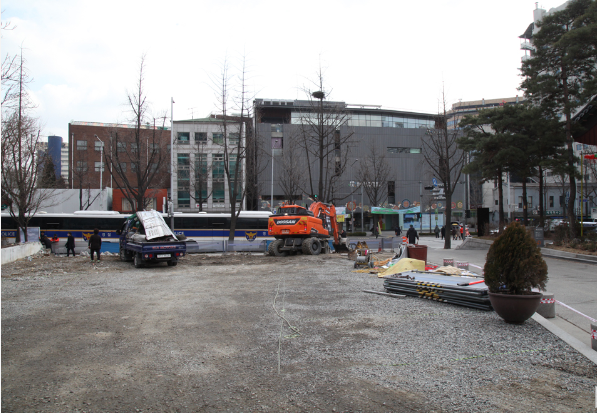 It is expected that the Project of Constructing the Comprehensive Jogye Order’s Headquarters in and around the area of 55, Ujeongguk-ro, Jongno-gu, Seoul, considered as the largest-scale project ever throughout the history of the Order, will gain further momentum with recent purchase of the land in the vicinity of Jogyesa previously occupied by stores and removal of the store building.

The store buildings next to the One Pillar Gate of Jogyesa were removed on March 8. Jogyesa and the Steering Committee for the Project of Constructing the Comprehensive Jogye Order’s Headquarters purchased the land in the vicinity of Sanga Buddhist Supplies, located next to the former Jogyesa Lay Buddhists’ Association Building, and refurbished the area. With the complete demolition of the store building on March 8 and removal of debris on March 9, now the area provides a sense of openness.

The landscape of the area has been renewed and improved befitting to the scale of the chief temple of the Jogye Order of Korean Buddhism by moving the lotus lantern workshop following the removal of the Jogyesa Lay Buddhists’ Association Building in 2016 and completing demolition of the store building, which previously blocked the entrance area to the temple.

Ven. Jihyun, the Director of the Project, said, “It is true that Jogyesa and the Central Post Office area seemed separate so far. The recent removal of the nearby store building is highly meaningful, as it broadens the view of the temple precinct and marks the launch of the second round of the Project. I understand that there have been concerns over lengthy process of land purchase, however, the Project is ongoing relatively faster than other refurbishing projects. The groundbreaking ceremony is scheduled to be held after the Buddha’s Birthday and I plan to raise awareness of the Project through the ceremony.”

Meanwhile, the Project of Constructing the Comprehensive Jogye Order’s Headquarters is planned to be completed by 2025, with the first step to construct the Memorial Hall of Oct 27 Dharma Persecutions; the second step to build a traditional culture and historic complex; and the third step to build the Memorial Hall of State-Protecting Buddhism. The completion of the Project is expected to transform the Jogyesa area, linked with Gwanghwamun and Insadong areas, into historical and cultural space where visitors can find traditions and cultural features well-harmonized.