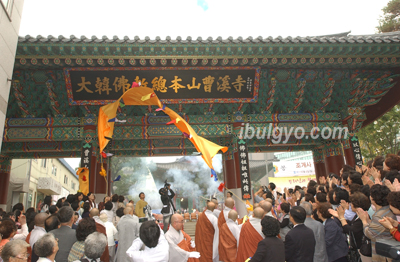 The hanging board and Juryun (verse couplets written on the pillars) of Jogye Temple, which represent the headquarters of Jogye Order, was pulled down during The Purification Movement of Korean Buddhism, but they eventually came to be hung again after the letters on them were written by Jeong Ha-geon, chairman of Korean Calligraphers Association and then engraved by Oh Ok-jin, the 106th Important Intangible Cultural Asset.

At 11.30am of Oct. 9, there occurred the Board-hanging Ceremony in front of the new One-pillar gate of Jogye Temple.

Wondam Sunim, abbot of Jogye Temple delivering his compliments said, "Many thanks to all those present despite their crowded schedule, among whom are Executive Director Jikwan Sunim and Elder Dongchun Sunim, Jeong Ha-geon and Oh Ok-jin, and Kim Chung-Yong, head of Jongro District Office." and expressed his opinion like this, "The board-hanging on the One-pillar gate of Jogye Temple will be a touchstone of a new history."

Along with the hanging board, Juryun was written on four pillars. The passage expresses wishes for the Buddhist dharma to be propagated permanently with Jogye Temple.