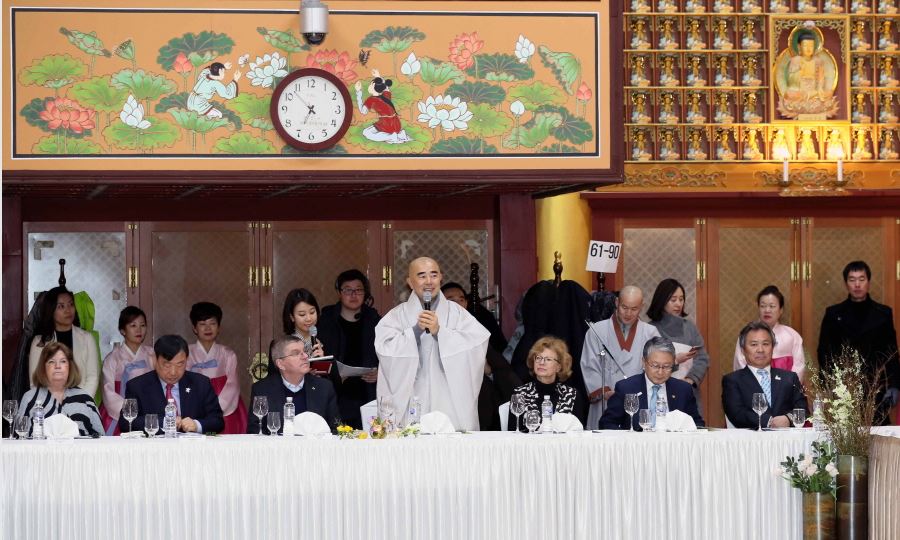 President Thomas Bach of the International Olympic Committee and the IOC Executive Board members and delegates enjoyed monastic cuisine and traditional Korean Buddhist culture at Woljeongsa in Pyeongchang County. The IOC delegation visited Korea to hold the IOC Executive Board Meeting at the Convention Center of the Alpensia Resort from 16th to 17th and to monitor the progress of preparation for the Pyeongchang 2018 Olympic Winter Games, which is less than a year away.

Approximately 60 attendees took a tour around Woljeongsa and enjoyed the welcoming dinner hosted by the abbot of the temple at the Hall of Great Dharma Wheel. The occasion was highlighted by the attendance of fifteen IOC Executive Board Members, including President Thomas Bach and Coordination Commission Chair Gunilla Lindberg, President LEE Kee-Heung of the Korean Sport and Olympic Committee, President Hee-beom LEE of the Pyeongchang Organizing Committee, Vice Minister Yu Donghoon of Culture, Sports and Tourism, Governor Choi Moon-soon of Gangwon Province and a renowned Korean novelist, Jo Jung-rae.

The welcoming dinner at Woljeongsa was organized in an attempt to add cultural touch to the Pyeongchang 2018 Olympic Winter Games, so that the international sport event could also serve as a cultural festival where participants can enjoy traditions and cultural aspects of the host country. Ven. Jeongnyeom, the abbot of Woljeongsa, guided delegates to the Octagonal Nine Story Stone Pagoda, National Treasure No. 48, Bell Pavilion and Buddha Halls. After the tour around the temple, attendees savored the humble yet healthy delights of temple food, which has been garnering much attention from the health-conscious around the world.

The participants also appreciated traditional taste of Korea through the resonating sound of Dharma Bell and four instruments at the Bell Pavilion and Seungmu (Korean Buddhist Dance), which was put on the stage at the banquet hall by the Gangwon Provincial Dance Company.

In his welcoming speech, Ven. Jeongnyeom introduced the Buddhist world view of ‘The whole world is a single flower’ and said, “It is my sincere hope that the successful hosting of the Pyeongchang 2018 Olympic Winter Games based on the two quintessential teachings of Buddhism, wisdom and compassion, could be a beacon of hope for people all around the world.”

President LEE Kee-Heung of the Korean Sport and Olympic Committee, who is also serving as the President of the Lay Buddhist Association for the Jogye Order of Korean Buddhism, highlighted, “We are committed to thoroughly preparing for the upcoming Pyeongchang Olympic Winter Games, regarding the event as a great opportunity to showcase traditional Korean culture as well as Korean Buddhism toward international visitors by developing a tour course which links up time-honored temples.”