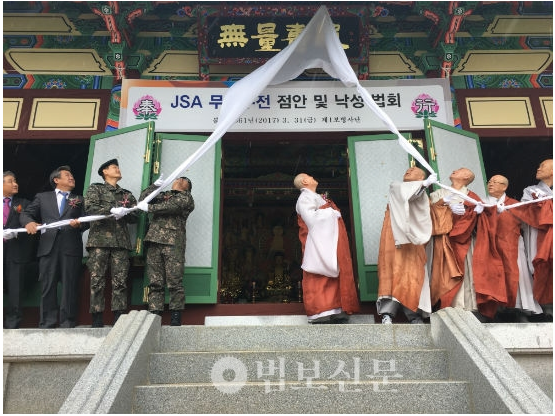 Muryangsujeon at the JSA Becomes a Symbol of Hope, Solacing the Pain of the Korean War

Ven. Jeongwoo, Head of the Special Military Religious District of the Jogye Order of Korean Buddhism, held the Opening Ceremony of Muryangsujeon (無量壽殿 Hall of Infinite Life) at the Joint Security Area (JSA) on March 31, 2017, exactly one year after the groundbreaking ceremony held in March 2016. The Hall will be a symbol of hope at the Area, which still reminds of the painful memory of the Korean War.

The Special Military Religious District held the ‘topping out’ ceremony inside of the Hall, which was inspired by the architectural style of the Goryeo period, last September. The Hall, also called as the ‘Dharma Hall of Peace’, is comprised of two wooden buildings, Muryangsujeon (82.32㎡) and the Dharma Bell Pavilion (9㎡), standing next to the Security Exhibition Hall of the JSA, Gunnae-myeon, Paju-si, Gyeonggi-do. The structure of the Hall was inspired by the Great Hero Hall of Sudeoksa and Muryangsujeon of Buseoksa, both are exemplary buildings of the Goryeo period. At the Bell Pavilion, the ‘Bell of Peace’ was established, based on the aspiration for reunification of the Korean peninsula and world peace.

Muryangsujeon will send out the message of peace and solace to both Korean and international visitors to the JSA, which is traveled by approximately 160,000 people annually. Amitabha Buddha was enshrined at the Hall to extend gratitude and tribute to the Korean War veterans and signify guidance of their souls to the Pure Land. The memorial boards of the fallen heroes from 16 countries who fought at the Korean War and sacrificed their noble life for world peace will also be housed at the Hall.

Ven. Jaseung, the President of the Jogye Order of Korean Buddhism, reaffirmed the significance of Muryangsujeon, “It is very meaningful that we open Muryangsujeon at the JSA to remember those who have died to protect the country, even amid mounted tension due to halted inter-Korean relations.” Ven. Jeongwoo, Head of the Special Military Religious District of the Jogye Order, highlighted, “Building the Hall and Bell Pavilion was made possible thanks to numerous people’s sincere aspiration for peace and the reunification of the Korean peninsula. Let us pray together for the day when the peaceful sound of the Bell could be resonated.”

The Opening Ceremony was attended by members of the military community, including 600 Buddhist officers, military officer monks and 1st Division Commander Lee Jonghwa as well as representative monastics of the Jogye Order, including Ven. Jaseung and Ven. Jeongwoo, and President Park Jeong-ii of the Buddhist Reserved Forces Association and President LEE Kee-Heung of the Lay Buddhist Association for the Jogye Order.