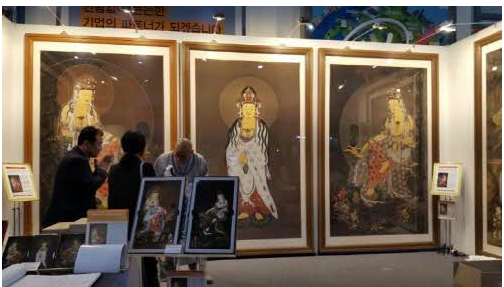 The 2017 Seoul International Buddhism Expo, held at the SETEC (Seoul Trade Exhibition & Convention) from March 23, successfully concluded its four-day journey. The Expo, held under the theme of “The shining moment in daily life with Buddhism practices”, was participated by 334 businesses and more than 70,000 visitors, establishing itself as a primary Buddhist cultural festival in Korea. This year, importantly, the number of overseas business participants doubled, leading to a sharp increase in the number of international visitors.

Mayor of Seoul Park Won-soon said, “The Seoul International Buddhism Expo has become one of the leading traditional Korean cultural conventions which the Seoul Metropolitan Government can boast about. I promise that Seoul City will provide administrative and promotional support in all possible ways for shared growth.”

Also held at the Expo was the Buddha Art Festival (BAF), the one and only traditional Buddhist art fair which intends to identify direct sales channels and overcome challenges in traditional art scene and introduce outstanding artists to the public.

The Buddha Art Festival has continued to grow over the last five years as the most well-received event at the Buddhism Expo. This year, more advanced features of exhibitions, such as ‘The Daily Life of the Buddha’ put forward by young Buddhist artists, ‘The Exhibition of KRW 300,000’ by the Art Donation Project, ‘The shining moment in daily life with Buddhism practices’, a main theme exhibition, and ‘Special Exhibition: Nepali Buddhist Art’, captured the attention of visitors.