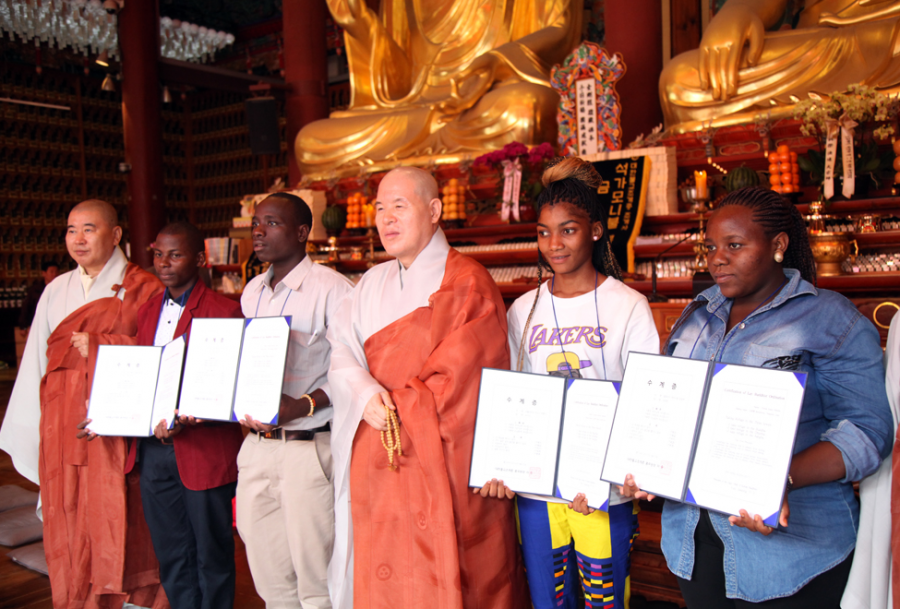 Dreaminus, the Jogye Order’s non-profit charity organization, invited 10 delegates from Tanzania, including teachers, students of the Borigaram Agriculture Technical College, and government officials, to Korea from April 24 to May 4 of this year. The Tanzanian delegation’s trip aimed to enhance their understanding of Korean culture through Yeondeunghoe, the Lotus Lantern Festival, and educational visits to institutions showcasing advanced agricultural technologies.

With an official dinner at 6:00 pm, the members of the Borigaram College and public officials started their 10-day schedule in Korea, departing from Tanzania on April 23.

At the Lay Buddhist Ordination Ceremony, Ven. Jaseung, the President of the Jogye Order, said, “Five precepts are like a ladder which can lead you to the Buddha land. You can ultimately attain enlightenment like the Buddha by taking five precepts and putting them into practice.”

Phares Salum Maduhu, one of the students who attended the ordination ceremony, said, “I am very happy to be at this ceremony and become a Buddhist. My interest in Buddhism has grown by attending Borigaram College. The temple and Buddha statues in Korea are very impressive. In the future after I graduate from college I want to become a public official in the agricultural sector in order to help others.”

The Tanzanian delegation met with the President of the Jogye Order before the lay Buddhist ordination ceremony.

At the meeting, Ven. Jaseung highlighted, “I hope your trip to Korea could serve as an opportunity to deepen your understanding of Korean Buddhist culture. I have heard that you have been studying hard at Borigaram College. Please keep up the good work so that you can contribute to development of Tanzania one day. The Jogye Order is committed to continuously providing support to your school.”

Kigamboni District Commissioner Hashim Maandilwa reciprocated, “I am very grateful to the Jogye Order for investing in the future of Tanzania.”

Ven. Jaseung put prayer beads on the wrists of each student and wished the delegates a memorable journey. The Tanzanian students expressed their gratitude to him with a traditional craft which they had brought with them from their home country.