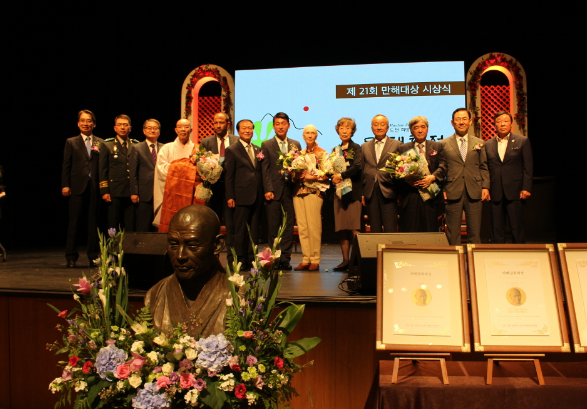 The representative of the White Helmets said in his acceptance speech, “Those who witnessed their loved ones and neighbors dying due to the Syrian Civil War choose one out of two options. Either hold guns or leave their home to be refugees. At a time when even international relief organizations from all over the world withdraw in despair, the members of the White Helmets chose stretchers, neither of the two, as a great poet and activist Manhae did not abandon humanity even in the darkest period for the Korean people.”

The 2017 Manhae Grand Prize Ceremony, in memory of Venerable Manhae (Han Yong-un, 1879-1944), a great Korean Buddhist reformer and also one of the 33 Korean cultural and religious leaders who initiated March First Movement, was held at the Inje Cultural Complex in Inje County, Gangwon Province, on August 13. The ceremony was co-hosted by the Association for Enhancing & Practicing the Spirit of Manhae, Dongguk University, Gangwon Province, Inje County and the Chosun Ilbo. This year’s Manhae Peace Prize was granted to the White Helmets, a Syrian search and rescue group, which has saved more than 80,000 people’s lives regardless of their political stance, religion and religious sects over the past 3 years in the horrendous war. The Practice Prize went to a world-renowned primatologist, ethologist and UN Messenger of Peace Dame Jane Morris Goodall. Honorary Professor Choi Dong-ho of Korea University and Chair of the Center for Korean Studies at UC Berkeley Clare You became co-winners of the Literary Prize. KRW 100 million will be given to each winner as prize money.

In his speech, the White Helmets leader Raed al-Saleh highlighted ‘hope’, while reminding the audience of the true meaning of humanity that Ven. Manhae advocated. The leader, who worked as a electronics salesman before the civil war broke out, said, “I lived in war over the past 6 years. Even at this moment many civilians, including children, are losing their lives or being severely wounded. The volunteers of the White Helmets are advocating peace and hope with nothing but stretchers in the war of no winner and glory, as Ven. Manhae was at the forefront of supporting humanity and spiritual practice.”

Although the White Helmets group was officially established in 2014, the volunteer rescue workers have saved the injured in war-torn Syrian cities and towns since 2012. Worldwide media and relief organizations started calling the volunteers wearing white helmets at rescue scenes the “White Helmets”. With the official name, Syria Civil Defence, approximately 3,000 members from all walks of life, including teachers, bakers, janitors and etc., have been involved in search and rescue in response to attacks and evacuated civilians from dangerous areas under the motto of “To save a life is to save all of humanity.” The volunteer workers immediately head to the bomb-hit places as soon as they hear ‘rescue orders’, setting aside what they are doing for a living. Nominated for the 2016 Nobel Peace Prize, the volunteer organization was mentioned by Time Magazine that “the White Helmets are bringing hope to hopeless Syria.”

The Manhae Practice Prize winner Jane Goodall said, “Pristine nature can still be found in Inje County. I am so privileged to receive the prize named after Korea’s great teacher, Ven. Manhae. We, human beings, cannot exist without nature. Continuing the spirit of Ven. Manhae, who emphasized that all living beings are noble, I am committed to relentlessly bringing peace and hope around the world.” Even in her 80s, Dame Jane Goodall is continuously carrying out a variety of activities for environment, humanity and peace as a globetrotter.

Honorary Professor Choi Dong-ho, co-winner of the Manhae Literary Prize, has researched and taught Korean modern poems more than 40 years at Korea University. Chair of the Center for Korean Studies at UC Berkeley Clare You, who also received the Literary Prize, was acknowledged for her endeavors to advance and expand Korean language education in the U.S.

Jogye Order President Ven. Jaseung (President of the Manhae Festival), who granted prizes at the ceremony, said, “Every year in August, a small mountain village in Korea attracts great heroes and heroines of the 21st century from all over the world thanks to Ven. Manhae. This attests to the humankind’s highest value of life, peace, freedom and equality even after several centuries. In Buddhism, those who spare no effort to ensure that all beings in the world can be benefitted and live in peace are called ‘bodhisattvas’. Today’s awardees are the bodhisattvas of our time, sincerely devoting themselves to making the mundane world happier.”

President of Dongguk University, Ven. Bogwang (Honorary President of the Manhae Festival), said, “The awardees are bringing hope to humankind by steadfastly taking on challenges even with self-sacrifice. It is my sincere hope that all attendants can be inspired by a lotus flower, the symbol of Buddhism, which blooms purely even in mud, and allow themselves to have the merit of purifying the mundane world.”

The 2017 Manhae Festival was held until August 14, with a variety of cultural and artistic events in the Manhae Village and Inje County, including poetry and painting exhibition, writing contest and poetry reading.