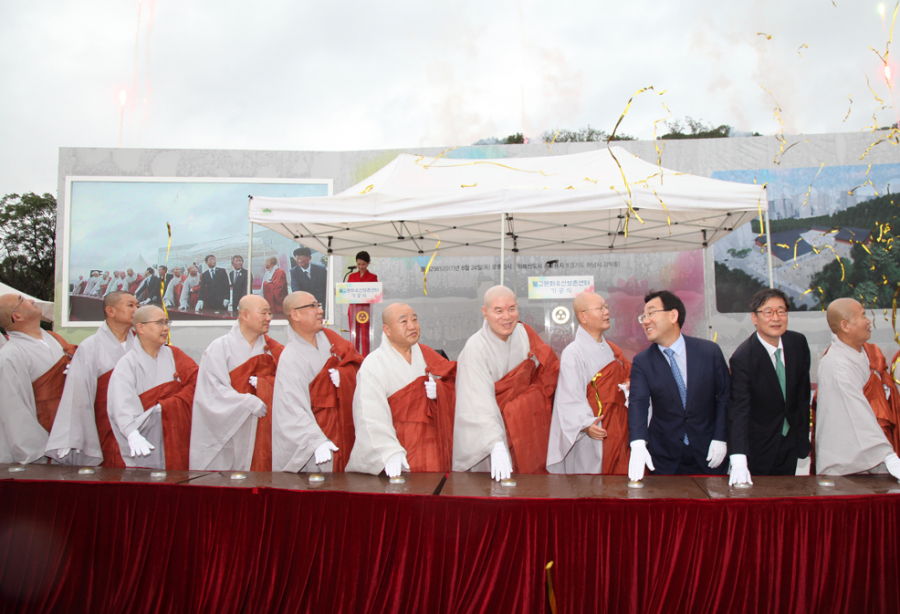 The groundbreaking ceremony for the Buddhist Cultural Properties Conservation Center was held at the lots reserved for religious buildings in Wirye New Town on August 24. Despite the unfavorable weather condition due to heavy rains, approximately 700 Buddhist monks, government officials, lawmakers and lay Buddhists attended the ceremony, including Ven. Jaseung, President of the Jogye Order, Ven. Jihong, Executive Director of Dharma Propagation, Ven. Wonhaeng, Chairman of the Central Council, Ven. Seonmuk, Head of the Special Military Religious District, and Ven. Chogyeok, President of the Buddhist Newspaper.

Buddhist cultural properties take up more than 60% of the state-designated cultural heritage in Korea, however, management and conservation treatment for the properties have not been sufficient. Importantly, even though in-depth inspection and conservation work is required for hundreds of years-old gwaebul (掛佛), or large-sized outdoor ritual paintings, there is no specialized space dedicated to undertaking such work. If damaged once, cultural artifacts lose their inherent values and their original features are not easy to be regained. Therefore, thorough monitoring of cultural heritage and prevention of potential damage are crucial.

In this regard, the Conservation Center is expected to serve as a general hospital for repair and restoration of sacred Buddhist treasures which were damaged or necessitate careful management. In addition, the Center will become a hub where the value of designated and non-designated treasured Buddhist artifacts owned by temples is thoroughly examined and systemized conservation and management work can be commissioned.

Ven. Jaseung expressed his gratitude to those who involved in the Buddhist Cultural Properties Conservation Center construction project through his opening remarks. He said, “The relentless commitment of Ven. Heowoon, then-Special Advisor for New Town Policies, and Ven. Hyeil, then-Director of the Department of Planning, made securing land and budget possible. The Jogye Order is committed to ensuring that the Center can lead cultural and welfare-related activities in the region, while providing professional conservation treatment for Buddhist cultural properties.”

The information leaflets, which highlighted that the Center will be a symbol of the new town by bringing both harmony of culture and wisdom of life together, were distributed prior to the ceremony.

The Jogye Order President also added, “So far, several works of gwaebul have been remained at museum storage facilities due to their large size and distinctive forms which made management of gwaebul challenging. However, with the completion of the Center in the future, large-sized outdoor ritual paintings, which show uniqueness of Korean Buddhist culture deserved to be more widely known throughout the world, will inspire us in a more accessible setting. I have every confidence that the Center will become a specialized conservation institution for Buddhist cultural properties by providing conservation treatment for overall cultural artifacts at Buddhist temples, including sculptures, paintings and books, going beyond inspection and conservation work for gwaebul, currently located at a variety of temples nationwide.”

The Buddhist Cultural Properties Conservation Center, with a total floor area of 13,000m2, will be constructed as a two-story building with a two-story basement. The size of the Center, 2/3 of that of the National Research Institute of Cultural Heritage in Daejeon, will be the largest among privately-owned conservation treatment facilities. The Conservation Center construction is a KRW 20 billion-project, including the government financial support of KRW 14 billion.