Haeinsa Temple plans to represent a solemn parade of carrying Tripitaka Koreana, as happened during the 7th year rule (1398) of Taejo in Joseon dynasty. The parade starts from Gangwha Island and ends in Haeinsa Temple. Tripitaka Koreana, originally made at the time of Goryeo dynasty, reflects strong hopes of Korean ancestors to defend the nation from military attacks by Mongo and to promote it as a stronger nation. As the head temple of the 12th Diocese of the Jogye Order of Korean Buddhism, Haeinsa Temple, headed by Abbot Hyuneung, plans to hold 2006 Hapcheon Tripitaka Koreana Festival from October 27th through 30th. 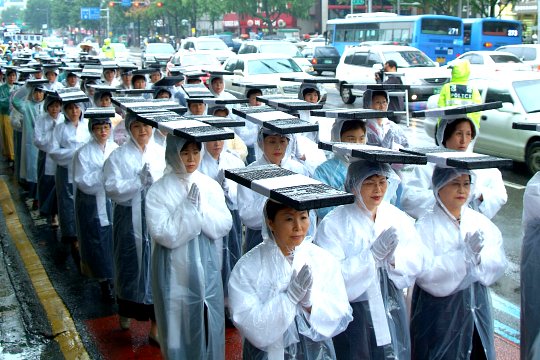 Tripitaka Koreana Festival now enters its 7th year, which attracts lots of attention with a variety of even features. At the heart of the festival lies the traditional parade of carrying Tripitaka Koreana, which provides deep insight into Korea’s wooden print history.

In addition, the event features “Trip to Wooden Print Culture,” which allows participants to experience the whole ranges of wooden print process. Specifically, the program is divided into five stages, from making wooden blocks to engraving words into wooden blocks by using traditional tools and methods to making traditional print papers to print to publishing.

In addition, Haeinsa Temple holds an adolescent woodcut print contest during the festival period. The competition is the first of the kind in the nation and is expected to provide teenagers a strong motivation to produce more creative and artistic works by succeeding the nation’s traditional wooden print tradition.

The festival, which begins with opening ceremony at 5 p.m. on October 27 at Haeinsa Temple, is expected to drum up heated response with performances starting from 6 p.m. on the first day. In particular, Pop Singer Kim Soo-cheol, who published the album titled “Tripitaka Koreana” in 1998, is anticipated to lead the audience to a mixed world of traditional and western music with a sense of unity. Undeniably, however, the festival culminates in the parade of carrying Tripitaka Koreana on their heads, which involves about 500 participants, from monks to local residents to visitors. The parade starts at Haein Elementary School and ends in Jangkyunggak, a repository of the ancient wooden print blocks, in Haeinsa Temple.

On top of this, the event features a variety of programs, from singing contest for local residents and adolescents to wooden print class for children, all of which will open at Haeinsa Temple. For the benefit of visitors, who will stay throughout the festival, Haeinsa Temple has also prepared temple stay programs providing experience for Korean countryside life. Haeinsa Abbot Hyungeung said, “This festival, recognized by the Ministry of Culture & Tourism, is the nation’s only event involving UNESCO-designated Tripitaka Koreana.” He emphasized, “This festival will pave the way for Koreans succeeding the real aspect of Korean tradition and enjoying cultural life with constant self-awareness.”