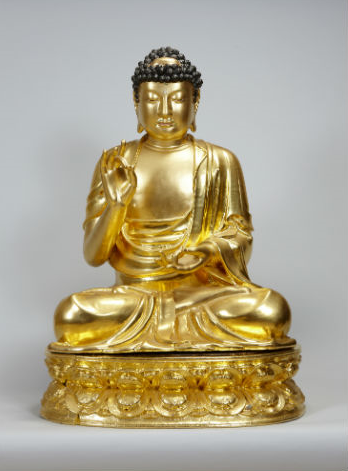 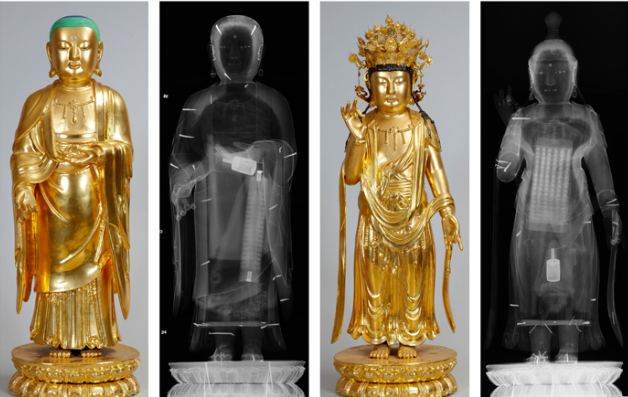 A fifteenth-century huryeongtong (候鈴筒 reliquary enshrining the five jewel jar) and thirty Goryeo-period sutras were turned out to be enshrined in the Amitabha Buddha Triad of Wondangam hermitage of Haeinsa in Hapcheon-gun.

On October 16, the Cultural Affairs Department of the Jogye Order (Director Ven. Jeonghyun) announced that Goryeo-period sutras and a record on the establishment of the Buddha and bodhisattva statues in 1694 were enshrined in the Wooden Seated Amitabha Buddha, the main Buddha statue in Bogwangjeon (寶光殿 Treasured Light Hall) of Wondangam hermitage, through in-depth study on the Amitabha Buddha Triad. In addition, X-ray photographs of the Standing Avalokitesvara Bodhisattva and Standing Ksitigarbha Bodhisattva confirmed that a Goryeo-period folded scroll of sutras and hanging scroll of sutra transcription which were similar to those discovered from the Amitabha Buddha were enshrined in the two flanking statues.

In the Wooden Seated Amitabha Buddha, twenty-eight volumes of the Avatamsaka Sutra printed from the authentic woodblocks of the Tripitaka Koreana and the Great Dharani of Enlightenment printed in 1375 were discovered as enshrined relics. The enshrined Avatamsaka Sutra holds significance for study on the Goryeo-period Buddhist sutras and books printed at temples and printing woodblocks, including the Tripitaka Koreana, while the Great Dharani of Enlightenment is the one and only dharani of its kind in Korea. With clear records on the process of printing and publication, including illustrations, the Dharani is said to be very important for further research on Buddhist painting history and philosophies and bibliography.

The record on the establishment of the Buddha and bodhisattva statues in 1694 is regarded historically noteworthy, too. It describes that Ven. Soongyeol (崇悅) and Ven. Jongan (宗眼) took the initiative of establishing the statues and Ven. Beopneung (法岑), Ven. Beopjong (法宗), Ven. Gyeongcheon (敬天), Ven. Cheongdam (淸湛) and Ven. Jiil (智日) participated in the work as monk sculptors. In addition, a silver reliquary enshrining the five jewel jar in the similar style of the one enshrined in the Vairocana Buddha at the Dharma Treasure Hall and Hall of Great Light of Haeinsa in 1490 enabled by the sponsorship of the royal court provided to Ven. Hakjo (學祖) was also discovered.

The Jogye Order Cultural Affairs Department disclosed the X-ray photographs of the Standing Avalokitesvara Bodhisattva and Standing Ksitigarbha Bodhisattva at the Treasured Light Hall of Wondangam. The same reliquaries enshrining the five jewel jars similar to the one enshrined in the Amitabha Buddha were confirmed to be preserved in the two flanking bodhisattva statues, too. In addition, individual sheets of sutras and dharani, colorful cover illustrations of sutras, folded scroll of sutras comprised of six lines and seventeen characters and seventeen-character hanging scroll of sutra transcription were confirmed to be enshrined near the reliquaries enshrining the five jewel jars. Importantly, it is noteworthy that the sutra transcription shows unique decorations like the metal ones which can only be found from the Goryeo transcription of the Mantra of Warding off Misfortunes and Bringing in Auspicious Fortunes (estimated to be from 1324) stored at Kanayamaji in Japan.

Meanwhile, the Standing Avalokitesvara Bodhisattva and Standing Ksitigarbha Bodhisattva are the only extant statues that have thoroughly maintained the original enshrinement form of the relics among the remaining statues in Korea. In this light, Wondangam hermitage aims to ensure that the statues will never be opened in the future, in an attempt to keep the six-hundred-year sacredness of the bodhisattvas intact.