The Press Conference of the New Year
by Venerable Seoljeong, the President of the Jogye Order of Korean Buddhism 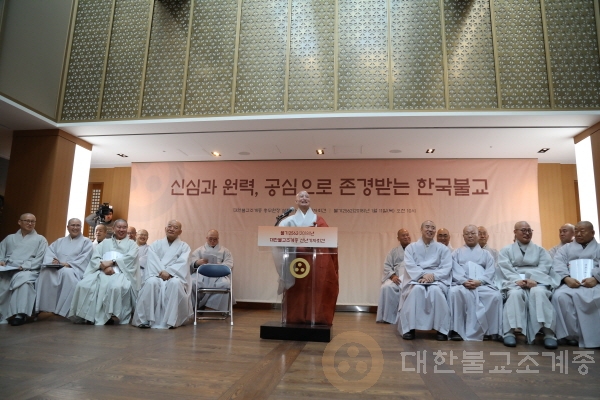 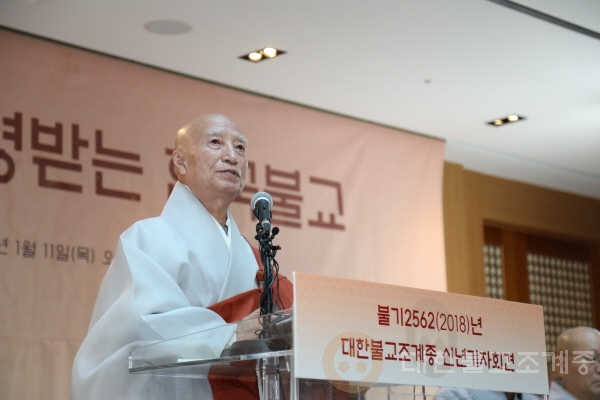 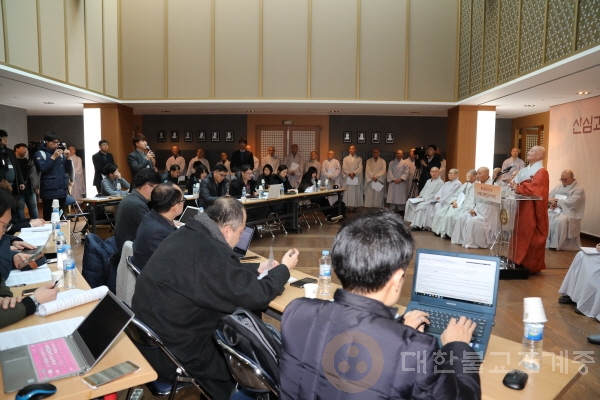 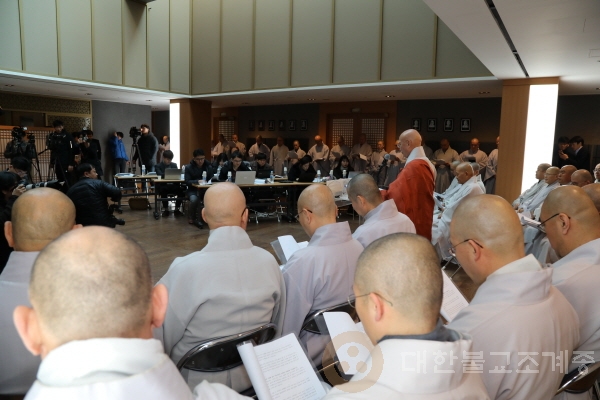 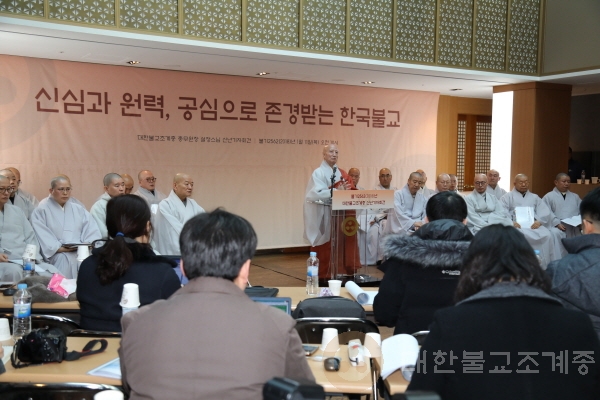 [The Change in Management of the Order: “Practice-Centric”]

Venerable Seoljeong, the 35th President of the Jogye Order of Korean Buddhism, has revealed his management directives in detail for the future of the organization. He stated his main goal as “Korean Buddhism worthy of respect.” The President aims to achieve this goal by implementing the management framework of “Practice as Our Foundation.”

On January 11, 2018 (Buddha Era 2562) a New Year’s press conference was held in the lobby of the fourth floor of the Memorial Hall of Korea Buddhist Historical Culture. There, the President explained his new plan forrunning the Jogye Order. He stated that he will initiate an external campaign of “compassion and equality” in all matters, and will push ahead with establishing “a private juvenile detention center for the future of Korea.” Internally, the President plansto develop a stronger sense of unity.The new administration plans to grant amnesty before the Buddha’s birthday to all monks or nuns who have received disciplinary punishments at any time since the integration of the order.In addition, the flawed election system,which threatens the stability of the organization, will undergo a comprehensive reform.

“Watershed”: The March Council Must Persuade the Fourfold Assembly

Since the integration of the order in 1962, the pardoning of the disciplined members of the Sangha for political reasons has become most-discussed and most controversial topic of all. As the provisional pardoning deadline is set to take place prior to the Buddha’s birthday, on May 22, this situation must be dealt with swiftly.

Venerable Seoljeong, the President, stated at the conference, “In our order, a number of ordained practitionershave undergone forced estrangement from the public,due to issues during that time period and political prosecution by the organization.” “Among these, the majority hopes to have their memberships reinstated, and rejoin the community of the Jogye Order. These individuals have continuedwalking on the path of practitioners, and have consistently kept their ordinated precepts, even up untilthis very moment,” he added. We can assume that the community is willing to forgive and embrace a monk or a nun who repents sincerely and asks for forgiveness, who continues to walk the path of a practitioner,despite any wrongdoings.” It appears that amnesty will be granted on quitean extensive scale, as it was declared, “Even the honor of the deceased practitioners will be reinstated.”

Despite all this, it won’t be easy. The formal bestowal of amnesty will “proceed in the form of a declaration of a great union of the Jogye Order, with the members of the fourfold assembly gathered together.”More specifically, the agreement and understanding of the fourfold assembly must first be acquired. With this essential prerequisite, a sincere repentance session will be held for the disciplined practitioners.

As those slated to receive amnesty had already been excommunicated, according to the charter of the order, the members of the Central Council of the sect must be persuaded. They are the only ones with the authority to amend the articles related to this issue. In other words, the upcoming provisional session of this council in March will be the critical watershed moment to determine their fate.

Venerable Dobeop is the Chairman of Reconciliation,and has been working towards clearing up the past affairs of the previous administrations and granting amnesty to the disciplined members. He recently made this announcement: “If we can show our spirit of mutual respect towards each member of our community, we will be able resolve this issue much more easily.” Furthermore, he added, “We should publically provide more opportunities like this to one another, to reconcile any grudges or misunderstandings.”

▲ Reformation of the Electoral System

Selecting a special committee for the election of the Central Council and cooperating; Planning for a Public Hearing

During the press conference, the topic that Venerable Seoljeong spent the most time on was “the election.” He expressed his firm conviction and determination to reform the election system, stating his intentionto put a stop everything that causes damage to the harmony of the Sangha and the reputation of the order.

On that day, the President pointed out the harmful elements of the electoral system that he witnessed during the process of being elected. He reaffirmed his conviction in regard to the reformation, stating his plan to build “an electoral system that is fitting for Buddhism,” whether it takes the form of direct or indirect voting. The electoral system is not the only item up for reform. It is expected that several major changes will take place throughout the order, including the election of the members of the Central Council, as well as the abbots of district head temples.

It seems that the new foundation that he is sketching focuses on “ways of selecting Buddhist-like leaders.” The President also suggested that the teaching of elder monks should be respected by referring to “the spirit of honoring the elders” at the conference. Moreover, he mentioned that he is trying to understand why the spiritual leader of Tibet, his Holiness the Dalai Lama, has managed to earn the unanimous respect of so many.

Currently, a special committee has been created for the reformation of the Central Council’s presidential electoral system. This team is working on a detailed description of all the changes to the introduction of a new agenda during a temporary session this coming June. Aligning with the directives of the council, headquarters will come up with its own policies for improving the electoral system within the order, where all the members of the Sangha can participate.

The Ministry of Justice’s Priority: “Resuming” Intra-Korean Exchange and Cooperation

Among various social activism projects, the area of most interest is the plan forestablishing a private juvenile detention center. During the question-and-answer session after the conference, the President clearly indicated his support for the cause, saying he wants to “found a juvenile detention center that can guide troubled youth,helping to build right character and foster a healthy view of nature based onBuddhist philosophy.” He also made it clear that this project cannot reach completion during his service. Nonetheless, he is planning to dedicate his life to this goal, as an ordained practitioner, for the sake of our society’s future.

Just in time, on the 11th of January, the Minister of Justice, Park, Sang-ki, also replied in delight, “The government is in process of drawing up a bill for establishing a private juvenile detention center, asthe Jogye Order has demonstrated its strong commitment to the project.”This was statedat a meeting attended by reporters for the ministry, and has received a lot of attention. Currently, there is a private correctional facility run by a Protestant organization, but there is currently no legal basis for establishing a private juvenile detention center. According to the Crime Prevention Policy Bureau of the Ministry of Justice, the legal basis for privatizing a juvenile detention center is set to be submitted to the National Assembly,within the first half of this year.

Of course, the project is still in the discussion phase. This goal is the ‘foremost Buddhist work’ that would require a huge portion of the budget. Nevertheless, it is certainly one of the grand plans that shows the sincerity of the new president and the 35th administration. In addition to this, it is expected that he will continue supporting the enactment of the prohibition on discrimination that was initiated during the previous executive administration.

Keeping “practice” in mind whether one works in administration, propagation or welfare.

Venerable Seoljeong, the order’s President, picked the first hwadu, orkey phrase, of the 35th administration in managing the organization as: “establishing the tradition of practice in the order.”On the 11th at the press conference, he pointed out, “The biggest obstacle in Korean Buddhism at the present time is the inability to focus on establishing the tradition of practice.” Therefore, he vowed, “The core managing philosophy of the order will be shifted to become more practice-centric. In this way, our identity as a practicing sect will be forged.”

Thus, the President has set an example, by attending a morning ceremony every day since his inauguration, without exception. For the last 60 years, he has focused his mind and energy on the importance of practice. One can expect these principlesto be naturally reflected in the way he runs the administration as its leader. Also, it is thought that only when recovering the tradition of practice, the aspirations of the executive office may be realized. “Buddhism like Buddhism, respect-worthy Buddhism and faith-growing Buddhism.” Actually, “expanding welfare for the Sangha members” dovetails quite well with the goal of optimizing the environment to allow pure focus on practice.

Publically, “a compassion and equality recovery campaign” is in process. The innovation campaign for the practice of faith, currently led by the Bureau of Dharma Propagation, can create a synergy effect, and help lay the groundwork of implementing practicing culture in greater society. This message was stated by an official from the headquarters of the Jogye Order. Similarly, the movement of “Leading a Clean and Sweet Life,” advocated by the late Venerable Beopjeong(1932-2010) back in 1994 can also be applied. Most of all, this will not focus only the administration, but also it was announced that the legislative and judiciary systems will be similarly strengthened under the directives of the tradition of practice. The upcoming steps of managing the Jogye Order will surely maintain the keen interest of public in the future.

Venerable Seoljeong, the President, emphasized at the press conference, “It is a real shame that the Buddhist cultural properties have continuously been neglected and mistreated, though these are the pieces of history and culture that have been through every life and death situation, alongside the people of Korea over the last 1,700 years,” and “the country must take active measures to protect these properties, as these are living and breathing culture, not just taxidermied specimens in some exhibitions.”

It is a common understanding that the government has been neglecting Buddhist cultural properties, blaming insufficient budget and system supports. As a result, the management of the cultural assets has been added to the burdens of temples and the order. Though the government should have voluntarily drawn up the required budget and systematically managed these traditional temples, instead they have forced individual monasteries take on responsibility for keeping these cultural properties. These burdensappear to place excessive and unnecessary restrictions on Buddhism. Ultimately, the status of Buddhist cultural properties should be elevated to the national level. For this reason, we have a plan to persuade government officials to employ a policy of “support,” rather than “restriction.”