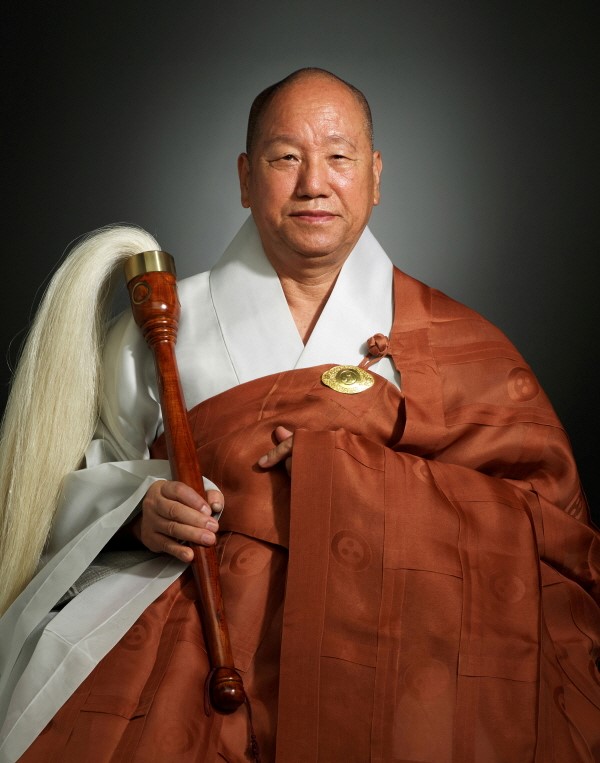 〔Supreme Patriarch Jinje lifted his dharma staff in front of the audience as he mounted the high seat.〕

Once the dharma staff sweeps the blue sky,

The one vehicle discourse, a separate transmission outside the 49 years of teachings from sutras, is transmitted.

The right dharma, the marvelous mind and the true nature of reality cannot be emulated even if tried,

And cannot be painted even if one tried to paint it.

Today is the end of the 2018 winter retreat.

The reason for spending the three winter months practicing zealously separate from secular world with the temple gates shut was solely to brighten up our original nature.

If one practiced during the retreat with resolute determination, he or she would have become a person with discerning eyes swinging the arms of great person.

If not, one should reflect on the three month retreat to examine oneself and strengthen his or her determination for seeing one’s true nature. Then, he or she shall concentrate on his or her Hwadu without moving like a rock.

As a ship, which advances forward against the wave pushing it away hundred times, ultimately meets softer wind that allows it to reach the new continent, a practitioner should concentrate more on Hwadu with strong doubt when defilements and hindrances boil up like a bean porridge. Only with such indomitable determination can Hwadu be pure so that one can reach the home within the mind.

If one has a Hwadu, he or she shall concentrate on the Hwadu.

If one does not have Hwadu, he or she shall ask, “Before being born from my parents, what was my true self?”

Such Hwadu shall be kept while sitting, standing, going and coming in daily life wherever and whenever with a strong doubt.

When one keeps his or her Hwadu, he or she must have very clear doubt on Hwadu to block many thoughts from intruding and to chase away drowsiness and confusion.

Even if there is infinitesimal amount of other thoughts or laziness, Hwadu has already run 5000 miles away. Then, the thoughts from the habits of the past would position themselves on the center of the mind acting as the owner of one’s mind.

So, cut off attachments to objects, put down dualistic mind, foster a strong believing mind and burning fearless mind to hold truly to Hwadu coming forward from one’s true mind with strong doubt and put all the efforts to leaving no room for the defilements and hindrances to drive in.

If one prepares him or herself sincerely as above, true doubt will be triggered. Then, one will forget to see or hear, and practice for weeks, months and years like an endlessly flowing stream. One will ultimately and abruptly clearly see and hear breaking Hwadu, melting and breaking one’s karma and return to one’s home within the mind.

Chan Master Guishan was the Guiding Seon Master for 15,000 monks at a comprehensive moneastic training compound in Tang Dynasty, China.

One day, Yangshan , a young monk, came and bowed to Chan Master Guishan wearing long hair and clothing of a lay person.

Guishan asked, “How will you escape a deep well without depending on a rope?”

Then, Yangshan asked, “Chan Master, what do you think about me growing out my hair and wearing clothing of a layperson?”

Guishan responded, “I do not wish to discuss your outward appearance. I rather admire your discerning eyes.”

Buddha’s teaching is focused on gaining the discerning eyes for the insight to the Truth instead of any form or appearance.

Yangshan became a student of Chan Master Guishan serving him for 15 years and became renowned in Chan studies.

At the congregation, Sansheng did not reveal his identity, but only practiced along with the rest of the monks for years.

One day Yangshan Huiji asked Sansheng, “What is your name?”

Sansheng said, “My name is Huiran.”

In such wonderful way, Yangshan and Sansheng instructed Buddha’s teachings to the monks.

As such, Sansheng was practicing in complete equanimity for three years or so. And, one day, Chan Master Guishan asked a question to Sansheng through his attendant.

The attendant went up to the front of Sansheng’s door lifting a short staff asking, “Can you lift this staff?”

Sansheng answered, “Guiding Seon Master must have a problem.”

When attendant returned to Chan Master Guishan to report on what happened, Chan Master told the attendant, “Go back and ask the same question once again.”

So the attendant went to Sansheng’s door again lifting the short staff asking, “Can you lift this staff?”

Sansehng answered, “A second offense is not permitted.

When the attendant returned and reported on what happened, Guishan greatly approved of Sansheng.

After a few days, Sansheng came to bid farewell to Chan Master Guishan.

In order to transmit his Dharma, Chan Master Guishan asked his attendant, “Bring my dharma staff and whisk.”

Sansheng responded, “I already have a teacher.”

Guishan asked, “Who is your teacher?”

Sansheng responded, “Linji is my teacher.”

Guishan said, “Linji must be lucky to have such a great student.”

Chan Master Yunmen, who received Dharma transmission from Chan Master Xuefeng, became a monk in early age and concentrated in practice with a determination and strong belief that he will see his true nature.  Having obatained the discerning eys of the eight guardians, Chan Master Yunmen received inga from Xuefeng after sovling the matter of great importance.

Chan Master Yunmen’s teachings were widely spread around China. He gained twenty students and was able to create a Yunmen sect prospering his Seon teachings.

As he was aging, Chan Master Yunmen gathered his students and asked three questions.

What is Buddha’s True Way?

What is the school of Kanadeva?

What is the hair-removing knife?

Many students answered well, however Bailing’s answers stood out:

What is Buddha’s True Way?

“A man with discerning eyes have fallen into a well.”

What is the school of Kanadeva?

“Snow has covered a silver bowl.”

What is the hair-removing knife?

“The moon is hanging on the branches of coral.”

Chan Master Yunmen was very happy to hear the answers.

He told his students, “Once I enter into Nirvana, you should not prepare offerings for my funeral. Instead always remember these three teaching from the Dharma talk.”

Monks of this Congregation!

If you understand this dharma talk, you have the right to become a Guiding Seon Master of a monastery.

If there is anyone who would like to explain the dharma talk, bring forward your answer.

Ultimately, how does the true phrase go?

How many people have already obtained the sharp edge of freedom?

There is no one equal to such person on earth or in heaven.

[After hitting the dharma pulpit with his dharma staff once, Supreme Patriarch Jinje descended from the high seat.]