Dharma Assembly for Peace and Security on the Korean Peninsula 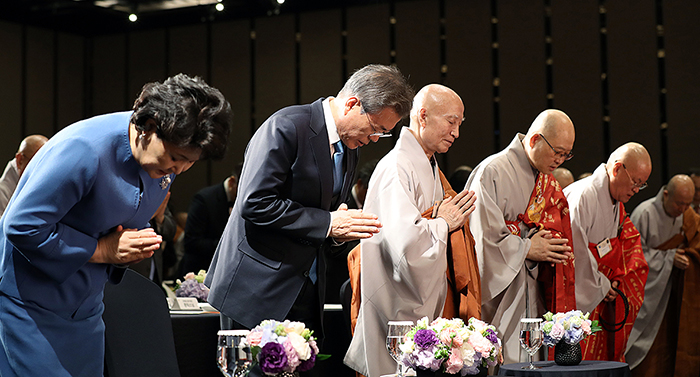 Dharma congregation was gathered to celebrate the Buddha’s Birthday of Buddhist Era 2562, and to wish for a successful inter-Korean summit and permanent peace on the Korean Peninsula.

Association of Korean Buddhist Orders held “Dharma Assembly for Peace and Security on the Korean Peninsula” at Grand Intercontinental Seoul Parnas on April 17. Around 1,000 participants were present at the event, including ordained and lay leaders of Buddhist orders represented by President of the Association, Ven. Seoljeong, President Moon Jae-in and First Lady Kim Jung-sook to pray for compassion and wisdom of the Buddha to establish peace and security on the Korean Peninsula.

“Dharma Assembly for Peace and Security on the Korean Peninsula” has been convened 18 times since 1981. This year’s ceremony focused on praying for a successful inter-Korean summit as the summit so significant historically to the future of Korean Peninsula has been scheduled to take place a month before the Buddha’s Birthday.

The Dharma assembly began with traditional cultural performance followed by offering to the Buddha, threefold refuge, prayer, opening remarks, congratulatory remarks and taking a great vow. During his opening remarks, Ven. Seoljeong stated that “the Dharma Assembly is prepared with wishes from the Buddhist followers for a successful inter-Korean summit and for the establishment of peace and security on the Korean Peninsula. […] all of our citizens and Korean people are sincerely wishing for success while the whole world is paying attention to the touching symphony of dialogue and communication that will take place on the Korean Peninsula.”

Ven. Seoljeong asserted that “Within the Buddhist teaching, which declared that Buddha-nature is within all beings, and self and others are inseparable, South and North, conservatives and liberals, ruling party and opposition parties, all races, religions and genders are all equally precious. […] The students of the Buddha will advance together for more equal and harmonious world through practicing the great compassion of the Buddha and removing entirely all types of discriminations.”

President Moon Jae-in asked the Buddhist followers to lead the effort to bring the citizens together by stating that “[he] would like to express [his] gratitude to Ven. Seoljeong and presidents of other Buddhist orders for holding such a great Dharma assembly for peace and security on the Korean Peninsula, especially ahead of the inter-Korean summit. […] Total denuclearization of the Korean Peninsula is the most urgent agenda in front of us and thawing the inter-Korean relations would required sympathy and support of the citizens.”

President Moon also stated that “Buddha has taught that one pure person can purify many and the many can brighten the whole world. […] As such, with strong volition, [he] wish[es] that Buddhism will be the force to lead the Korean society to more just society and also for true peace and cooperation on the Korean Peninsula.” North Korea’s Buddhist Federation sent a congratulatory telegram to express their support for the Dharma assembly. The telegram read “We would like to congratulate [the Association of Korean Buddhist Orders] for successfully holding the Dharma assembly for peace and security on the Korean Peninsula Korean with active participation from the Buddhist orders in South Korea. […] Buddhist followers in North Korea will also put our efforts to tend today’s historical unity of our people in spring to bring fruitful results in autumnl and to open a new chapter for peace and independent unification.”

The Dharma assembly concluded with the participants taking a great vow to fervently practice for co-prosperity and cooperative resolution of conflict. The participating Buddhist followers promised “to follow the Buddhist teaching and to remove distinction between self and others and to listen to the heart and mind of others.” The participants also pledged “to sing the song of cooperative resolution of conflict and inter-connectiveness so that strong and weak, rich and poor, South and North can harmoniously coexist.”