Jogye Order Console the Spirits of May 18 Gwangju Democratization Movement 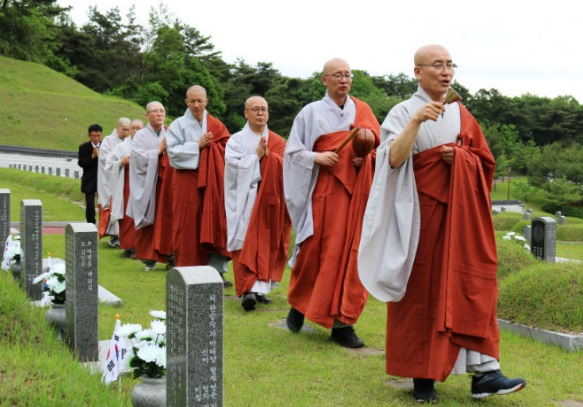 Jogye Order of Korean Buddhism led a prayer event for the victims of May 18 Democratization Movement at May 18th National Cemetery and Mawngwol-dong Cemetery to commemorate the 38th anniversary of the movement and to wish for peace on May 17.

The prayer event was the first occasion held by the Order to wish that the fallen victims, who refused the military regime and demanded democracy in Korea, would reach the Pure Land of Utmost Bliss.

Ten members of the Order’s Social Labour Committee including Chair Ven. Hyechan, and Vice Chair Ven. Hyemun and Ven. Jimong offered incense and flowers, and chanted the Heart Sutra in front of the May 18 Memorial Monument to honor the martyrdom.

Through his commemoration remarks read on behalf by Ven. Hyechan, the President of Jogye Order Ven. Seoljeong emphasized that “Democracy that the victims of May 18 sacrificed their lives for have prospered into today’s democracy and peace in Korea. Korean Buddhists will practice diligently to inherit the noble commitment.”

As Ven. Jimong and Ven. Woodam chanted the name of Amitabha Buddha, therest of the members of the Social Labor Committee walked around each of the graves to console the spirits of the victims. Finally, the monks stopped in front of the grave of Late Kim Dongsoo who was a sophomore student at Chosun University at the time. He was the leader of Korea Buddhist University Federation’s Gwangju/South Jeolla branch. Kim Dongsoo lost his life while resisting the military force at the provincial office, leaving behind a pin from the Korean Buddhist University Federation and prayer beads,

The family of Kim Dongsoo had tears in their eyes as the monks were chanting and praying to console the spirits. Mother of Kim, Mrs. Kim Byeongsoon (83) expressed her gratitude to the monks for coming and praying for her son. She also mentioned that she hope to “see the full truth about the May 18 Democratization Movement would be ascertained” in her life time.

On May 15, the Order hosted a special preview of a documentary “The Hinzpeter Story” at the Memorial Hall of Korean Buddhist History and Culture. “The Hinzpeter Story” is a documentary about Mr. Hinzpeter, the protagonist of the recent movie “Taxi Driver”, who was a German reporter that publicized the tragic story of Gwangju Democratic Movement to the rest of the world. At the special preview, President of Jogye Order Ven. Seoljeong stated that “Atrocity as May 18 should not be repeated. The Buddhist community will lead the effort to finding out the true history.”​