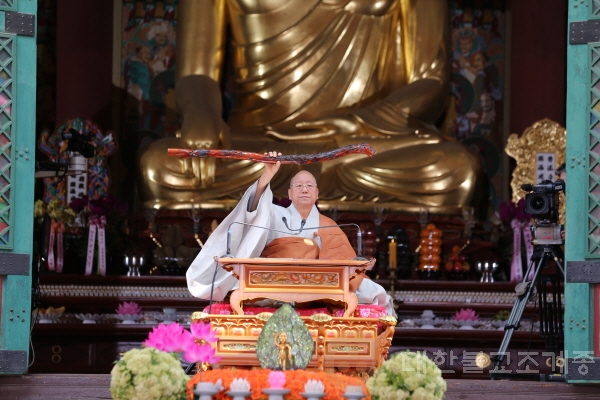 Buddhist Era 2562(2018) Buddha’s Birthday Celebration was held at 10:00 of May, 22 in all the temples nationwide including Jogyesa Temple.

Tens of thousands participated in the Buddha’s Birthday Celebration hosted by President of Jogye Order Ven. Seoljeong. Buddhists, who have devoted their efforts in promotion and promulgation of Buddhist teachings, were awarded commendations at the event. This year’s recipients are Adm. Um Hyun-seong (the Chief of Naval Operations), Kim Young-im (a Traditional Music Artist), Um Hong-gil (a Climber), Kim Choon-soon (the Chief of the National Assembly Budget Office), Lee Sang-ho (a Snowboard Olympian). Each of the recipients was recognized at the occasion for practicing compassion and making our world more beautiful in each of their respective field.

The celebration in Jogyesa was held in the order of temple purification ceremony, six offerings, striking dharma drum and bell, bathing the Buddha statue, offering candle, incense, tea and flower, congratulatory speech by the abbot of Jogyesa Temple, award ceremony for distinguished Buddhists, congratulatory remarks by Ven. Seoljeong, President’s congratulatory remarks, Supreme Patriarch’s Dharma message, reading the Intra-Korean joint letter of aspiration and a letter of aspiration with Ven. Ilam as the MC.

Supreme Patriarch of Jogye Order the Most Ven. Jinje stated that “70 years of division and confrontation, tension and competition have passed on the Korean Peninsula. However, since two Koreas use same language, and share common culture and history as one people, the road to peace through dialogue and reconciliation has always been open to us. (…) The true path toward achieving the unity of North and South Korea lies in the recovery of our homogeneity as one people.”

President of Jogye Order Ven. Seoljeong stated that “If we have faith in the fact that we are Buddha, recover the original pure mind, and live with a sincere heart, everyone we meet will be bodhisattva and everywhere we go will be the pure land of utmost bliss. If we can all live as Buddha from this moment, everyday would be “Buddha’s Birthday.” I pray that the intrinsic meanings of Buddha’s birth would bloom as flowers in our mind filling it with the scent of peace and happiness.” 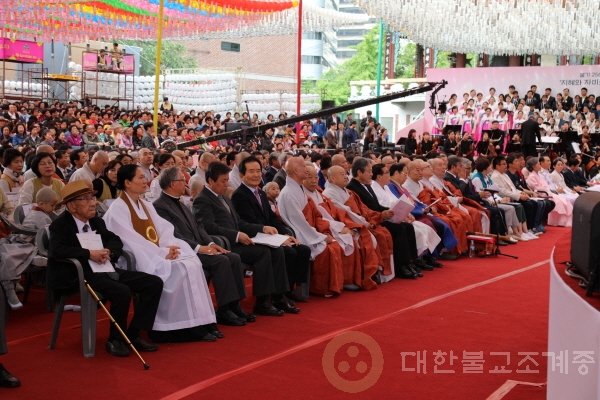 This year’s celebration was extra special in that North and South Korea have selected and read a joint letter of aspiration for the first time since the Buddha’s Birthday of 2015.